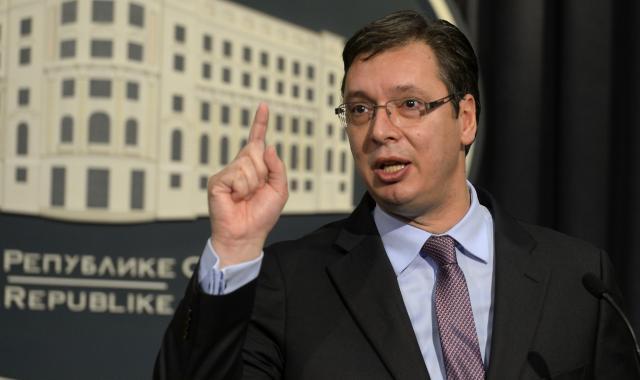 Speaking on Friday, he remarked he was "not clear on why they (organizers) didn't say so from the beginning."

These remarks came in the wake of the latest protest organized by the "Let's Not Drown Belgrade" initiative, held on Thursday.

Vucic spoke in response to a reporter's request to comment on the presence of NGO and civil sector figures at the protest last evening, including Sonja Biserko, Sasa Gajin, and Borka Pavicevic.

"Let them do their job, and we will do ours, let them bring down, we will build up," the prime said, and repeated that protests, "including this one," are democratic and legitimate - "only they should have said from the beginning what the real reason for the demonstrations was."

He then remarked ironically that he was "fascinated by their strength" and "suggested" that those financing the initiative's activities should instead invest "three or six times as much in some projects because of which we will live better."

"When you find a mesna zajednica (a municipal subdivision) where I won't be able to gather more people than they do from all sides, sack me immediately," Vucic concluded.

Earlier on Friday, Commissioner for Information of Public Importance and Personal Data Protection Rodoljub Sabic said the Higher Prosecution informed him that information regarding the Savamala case had been given to the initiative organizing the protests.