Serbia's ties with Russia "will be problem in EU talks"

President Tomislav Nikolic says a delegation of EU parliamentarians he received in Belgrade was "worried about the development of relations with Russia." 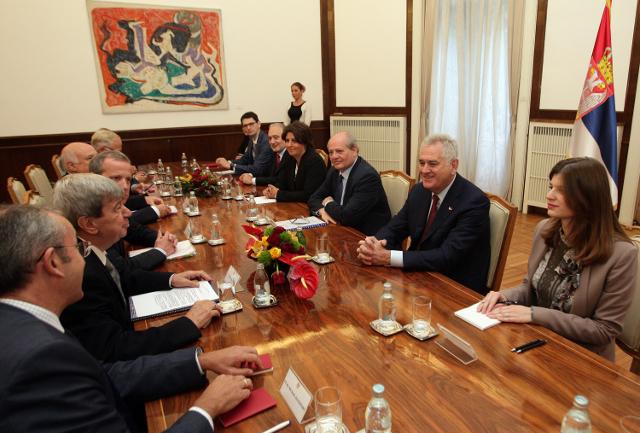 The meeting in Belgrade (Tanjug)

The delegation of the EU-Serbia Stabilization and Association Parliamentary Committee (SAPC) was led by Eduard Kukan.

"One can tell that the parliamentarians don't belong to political parties but to the states they come from and that is how they speak, but one can tell they are concerned about the development of relations with the Russian Federation, since they don't know for how long the European funds helping with EU's losses incurred by the lack of cooperation with the Russian Federation will last," Nikolic told reporters in Cuprija on Thursday afternoon, where he was present for the start of this year's harvest in the vineyards of the Rubin company.

"Therefore, what will be a big obstacle and a problem in finishing (membership) negotiations with the EU, and is already now being clearly crystallized, are relations with the the Russian Federation, and that issue will come up on the agenda," Nikolic said.

He said the meeting earlier in the day in Belgrade lasted an hour longer than planned, "because there were many parliamentarians from various states and each had their own point of view, each their own questions, their own comments."

"I made an effort to respond to each completely and explain either what they don't know, or what they were not sufficiently interested in before," said Nikolic.

Nikolic noted that the meeting was useful and that European Parliament members "thanked him for the exhaustive information and the truthfulness."

"So that now, the 11 of them know about the situation in the Balkans better and about Serbia's relations with other states, and we went as far as to consider relations with our far and near neighbors and with China, and the roles of the U.S., the EU, and Russia," Nikolic said.

Speaking during the meeting earlier in the day in Belgrade, the president said that Serbia has for years been making major efforts towards establishing lasting regional stability but, in spite of this, the situation in the region has been very turbulent over the past months.

"A problem has now emerged that can only be solved if we all comply with European standards and the original principles of the EU, and that is a wish for peaceful society. Serbia wants no conflicts," Nikolic said.

Serbia is firmly resolved to become a full EU member as soon as possible, he said, expressing the expectation that new chapters in the EU accession talks would be opened soon.

Eduard Kukan, said that the EU had great interest in establishing lasting stability in the region, and that Serbia had demonstrated political maturity by contributing to that goal.

Kukan said that Serbia had made great progress on its path to the EU because it behaved as a reliable partner and conducted a responsible policy, and pointed out that he was confident that new chapters would be opened very quickly.