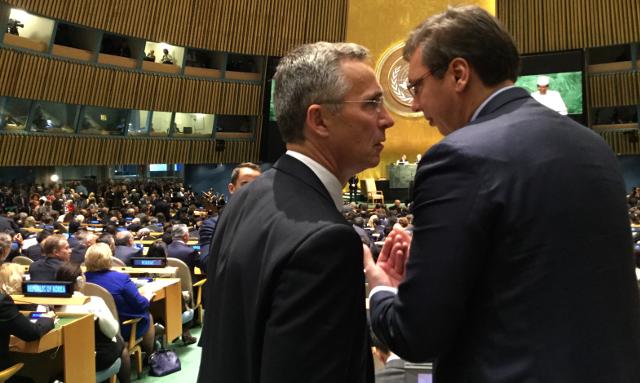 Stoltenberg and Vucic are seen at the UN on Tuesday (Tanjug)

Vucic and Stoltenberg met on the fringes of a UNGA session in New York to discuss the situation in the Western Balkan region.

Reacting to a statement by NATO General Petr Pavel that the Balkans remained a potential source of war conflicts, Vucic had said on Sunday he wanted to speak with Stoltenberg as soon as possible.

In an interview for RTS, Vucic said he was disappointed with Pavel's statement because Serbia was not threatening anyone.

Serbia does not want any fighting or conflicts, but to develop as a country, Vucic said.

B92 on Tuesday asked NATO whether Pavel's statement, made recently in Croatia, about the Balkans "still being a source of potential armed conflict" while NATO "needs to have the capabilities to deter and defend against any threat" can be considered a threat.

A Brussels-based military representative of the Western alliance said: "NATO is not threatening anyone. General Pavel mentioned tensions in the region that are also recognized by all leaders in the region."

When asked whether Pavel's statement reflected his own position or that of NATO, the official replied that Pavel made the comments as the chairman of the NATO Military Committee, and added: "NATO and all countries in the region have close and good cooperation around a common goal - a safe and secure Western Balkans."

Reacting to Pavel's statement - which also included the remark that the Balkans "might be the next frontier not only for Islamic terrorism but also for Russian influence - Serbian President Tomislav Nikolic told the Belgrade-based tabloid Kurir:

"I don't understand which country he had in mind when he said that Russian influence will prevail there and that it will become as dangerous as terrorism is. Should we immediately jump up, and start, for their sake, counting our children that would go to war? NATO should be ashamed of itself! Why don't they clean up their own backyard first. Why are they coming after others who are not in NATO? Who is doing the saber-rattling in the Balkans? Serbia? No! Somebody else is provoking all the time."