No backing for RS referendum from Serbia's top officials

The meeting of President Tomislav Nikolic and PM Aleksandar Vucic with top officials from the Serb Republic (RS) has been held at the Presidency in Belgrade. 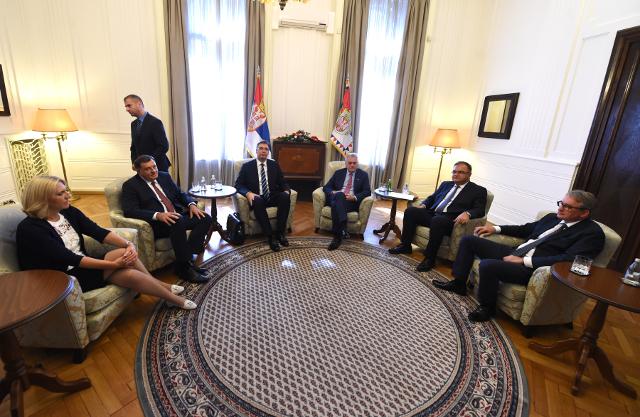 In a joint statement handed out to reporters after the meeting Nikolic and Vucic said they did not support the holding of the announced RS Day referendum, "but do not want to influence in any way a change in political attitudes of the legitimately elected politicians in that entity."

Vucic and Nikolic "underlined that Serbia’s policy is to respect the territorial integrity of Bosnia-Herzegovina, as well as the integrity of the entity of the Serb Republic." Srpska.

They condemned the organized attacks "from certain countries in the region" on the RS and the Serb people, as well as the hypocritical silence and making false symmetries and balances by a significant part of the international community, the Serbian government said on its website.

Regardless of certain differences in the perception of the situation in the region, Serbia will always support the Serb people, the citizens of the RS and its institutions, Vucic and Nikolic concluded.

The meeting was called to consider the situation after the Peace Implementation Council (PIC) in Bosnia-Herzegovina said it was "advising" the Serb entity (RS) not to hold the RS Day referendum.

In a statement that was not supported by Russia's ambassador, the PIC also said it would "not tolerate any violation of the Dayton peace accords, including a secession attempt."

The RS Day referendum has been scheduled for September 25.

Vucic spoke earlier on Thursday to say he no longer saw the point of the meeting, "considering that RS leaders have made their decisions in advance."