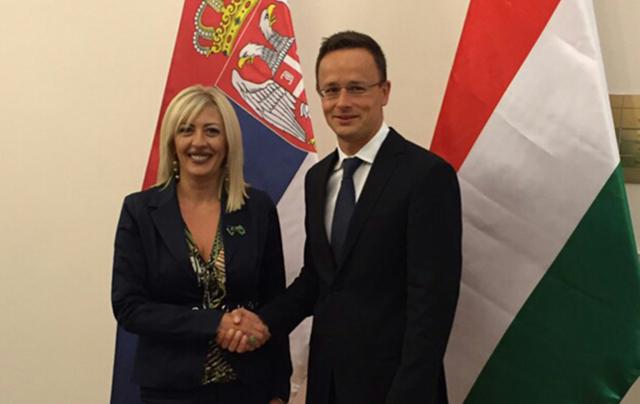 Hungarian Foreign Minister Peter Szijjarto and Serbian Minister without Portfolio in charge of EU integration Jadranka Joksimovic announced this at a press conference in Budapest on Wednesday.

A joint commission set up by China, Hungary and Serbia will also meet in Belgrade on Friday to discuss the construction of a rail line from Belgrade to Budapest, Szijjarto said.

Joksimovic said the two governments would meet by the end of the year - probably in October or November.

She thanked the Hungarian government for supporting Serbia.

Szijjarto announced that a new border crossing between Serbia and Hungary would be opened in 2017, with another to be established by 2020.

Hungary is one of the most sincere friends of Serbia and it strongly supports the country's European path, Jadranka Joksimovic and Peter Szijjarto said after their meeting in Budapest Wednesday.

Joksimovic pointed out that cooperation and good relations with neighboring Hungary are important.

She said that Serbia will continue the policy of a humanitarian approach towards the migrant crisis, and agreed that a comprehensive EU policy is needed to ease the burden on the Balkan route.

Szijjarto said that Hungary supports the EU integration of Serbia and urged the EU institutions to complete the country's accession negotiations by 2020, pointing out that intentions by any EU institution or member state to slow down the process are unacceptable.