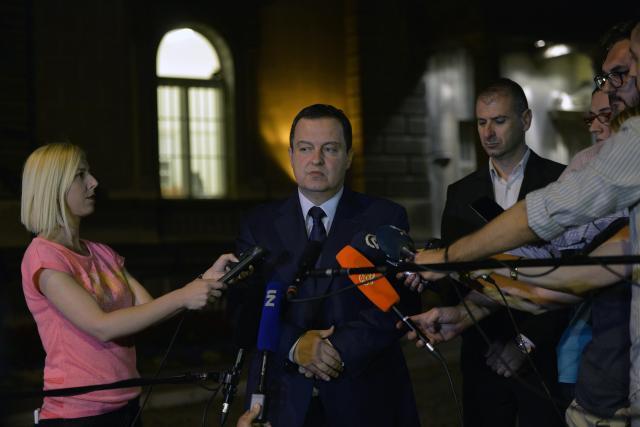 This is what Foreign Minister Ivica Dacic told media crews gathered in front of the Presidency in Belgrade late on Tuesday.

Dacic made the announcement after an urgent meeting convened by President Tomislav Nikolic, attended by PM Aleksandar Vucic and several of his ministers.

Dacic said that Nikolic and Vucic will speak with Serb leaders about the position announced earlier in the day by the Peace Implementation Council (PIC) in Bosnia-Herzegovina against the holding of a referendum in the Serb entity (RS), but also about "the current situation in general, and possibly, about further steps."

He said that top state leaders analyzed the situation concerning security and regional stability, and discussed "the issue of our vital national interests."

"Measures have been agreed on and will be undertaken, and are already being undertaken, to protect our national and state interests, so that people can rest assured that security will not be compromised in the country and, we hope, in the region," Dacic said during a break in the meeting held at the Presidency of Serbia.

"We are interested in preserving security and stability in the region," said Dacic.

Nikolic convened the urgent meeting in Belgrade after the Peace Implementation Council said it was "advising the RS not to hold the referendum, and would not tolerate any violation of the Dayton peace accords, including a secession attempt."

Russian Ambassador Petr Ivantsov was the first to leave the meeting, announcing his country did not support the text of the joint statement "because it threatens and condemns."

"I think a solution to the problem can be reached, above all, through dialogue," he said.

The referendum in question concerns last year's ruling of the Bosnia-Herzegovina Constitutional court that RS Day, January 9, cannot be a state holiday because it coincides with a Serbian Orthodox feast and is the entity's patron saint day (slava) and is thus discriminatory toward those RS citizens who are not of Serb ethnicity and Orthodox Christian faith.

Announcing the referendum in November last year, RS President Milorad Dodik said that citizens will be asked to decide whether they support the court's decision and whether January 9 should continue to be celebrated as RS Day.

The referendum is to be held on September 25.