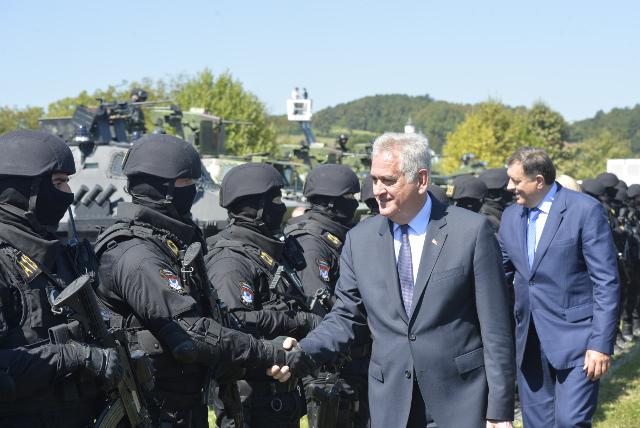 It was staged by police officers from Serbia and the RS - the Serb entity in Bosnia-Herzegovina - at a border crossing near Loznica, a town in western Serbia.

The two presidents congratulated those who took part in the successful joint anti-terrorist exercise, the Serbian government said on its website.

Serbian Police Director Vladimir Rebic "expressed confidence that the joint exercise of the police units of the two countries has shown that we are ready to respond to all security threats."

Before the start of the exercise, Rebic said that "terrorism is present in the Balkans" while the objective was "to send a quick and clear message that we are able to respond to all challenges."

The exercise, which began with the sounding of the Serbian national anthem was also attended by RS Prime Minister Zeljka Cvijanovic and ministers of the two governments.

The exercise was carried out by around 200 members of two police units, more than 50 vehicles, five aircraft and five vessels. Commander of the Special Anti-Terrorist Unit (SAJ) Spasoje Vulevic gave a report at the beginning of exercise.

At this demonstration exercise, which was held at the Trbusnica border crossing, the police units of Serbia and the RS "showed strength and training in the fight against terrorism and readiness to respond to all security threats," the Serbian government said.