The Belgrade-Pristina dialogue is now "deeply frozen," with Pristina "unprepared to implement the agreement on the Community of Serb Municipalities." 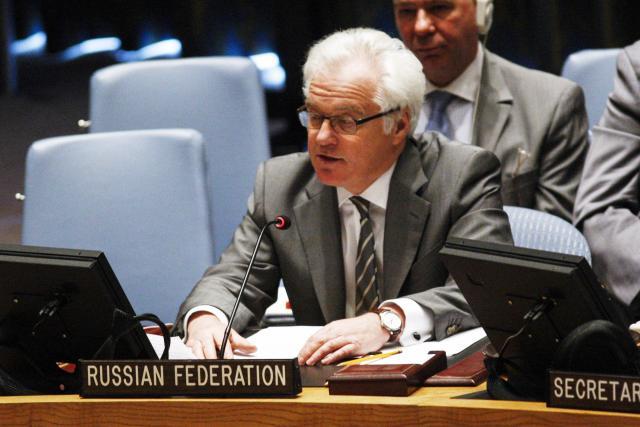 Russian Ambassador to the UN Vitaly Churkin said this late on Thursday European time, during a Security Council meeting dedicated to Kosovo.

Churkin argued in favor of UN's stronger presence in the province in order to overcome the slowdown in the dialogue.

According to him, the issue of border demarcation with Montenegro has brought to the surface stronger calls to "unite all Albanian lands" and create "a Greater Albania."

Churkin also said the start of work of the Special Court (for KLA crimes) was being stalled, "excuses looked for - in order to identify and neutralize witnesses."

“Because of the weakness of law enforcement and security in the whole region represents a grey area in the center of Europe, which is used as a shelter and transit platforms, not only representatives of the criminal world, but also radical Islamists. This favors the use of the territory by extremist groups for recruitment and training of militants," the Russian diplomat said.

Churkin also spoke about the situation concerning the Serbian Orthodox Church of Christ the Savior in Pristina, saying the temple "could have been a symbol of religious tolerance." Instead, he continued, digging has been done around the church in order to find alleged remains of Albanian victims - "but, as expected, nothing has been found."

Churkin described as "unacceptable" Pristina's statements about the UN mission in Kosovo, UNMIK, being an instrument of Russian influence, noting that he considered these "an attack on UNMIK and the UN."

He also pointed out to "an episode" being left out of the UN secretary-general's report, that the Council gathered to consider - namely, that the Russian ambassador in Belgrade, who was visiting Kosovo, asked to meet with the commander of KFOR - the NATO-led troops in Kosovo - but that the officer "could not find the time."

In this context, Churkin reminded the Council that NATO was present in Kosovo based on a UN resolution, Tanjug reported.

U.S. representative Michele Sison said that progress in normalizing relations had slowed down and called on Belgrade and Pristina's leaders to carry out their agreements, the Beta news agency reported.

"The U.S. supports Kosovo on the road to becoming a peaceful, democratic country. If Kosovo succeeds, the entire region will succeed," she said and "voiced her hope that Kosovo would become a member of the UN and called on all member states to recognize Kosovo's independence."

The U.S. representative said that she was concerned over violence in Kosovo adding that "there is no place for using tear gas in a democracy."

China's ambassador said he hoped that Serbia and Kosovo would continue their dialogue at the highest political level for the purpose of maintaining peace and stability in the region.

The British representative in also voiced his concern due to the stalemate in the dialogue between Belgrade and Pristina and said that new energy was needed to achieve the normalization of relations between Serbia and Kosovo.

The French ambassador said that the Brussels agreement needed to be applied as soon as possible, including the key element in the dialogue the formation of the Community of Serb Municipalities, and called for the resumption of negotiations at a high political level.