U.S. Vice President Joseph Biden did not honor diplomatic protocol when he failed stop in front of the Serbian flag and honor it by "a slight bow." 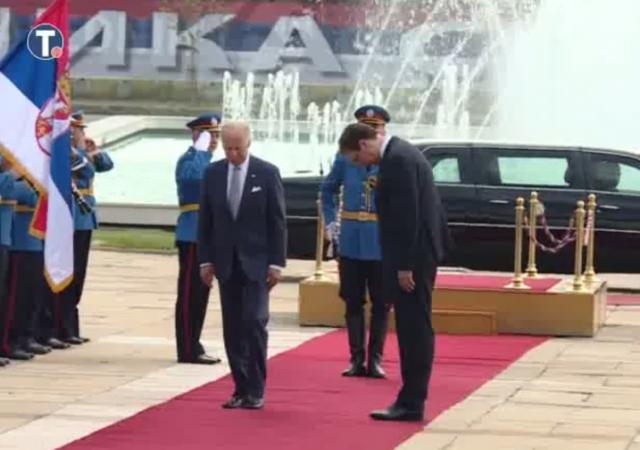 This was taking place on the red carpet in front of the Palace in Serbia in Belgrade, where Biden was welcomed on Tuesday.

The Serbian Foreign Ministry's Protocol Guidelines (link to a PDF file in English), require the head of a visiting mission, walking on the red carpet in front of the Guard of Honor, to honor the flag by a slight bow.

Biden, who was walking along Prime Minister Aleksandar Vucic, stopped and looked toward the Serbian flag - while Vucic did the "slight bow" - and then continued walking.

During his first visit to Serbia in 2009, Biden was on the same red carpet with then Serbian President Boris Tadic, who at the time discreetly signaled with his hand to the U.S. official to stop next to him, so they could honor the Serbian flag together.

Nevertheless, Biden remained on his line of movement, and then nodded his head toward the flag.

The following videos show other world leaders visiting Belgrade and honoring the protocol in question: during his last visit to Serbia, Russian President Vladimir Putin honored the flag of the host country by a deep bow:

... as did Chinese President Xi Jinping: