Supporters of Serbia's opposition SRS party gathered in Belgrade on Tuesday afternoon to protest against the visit of U.S. VP Joseph Biden. 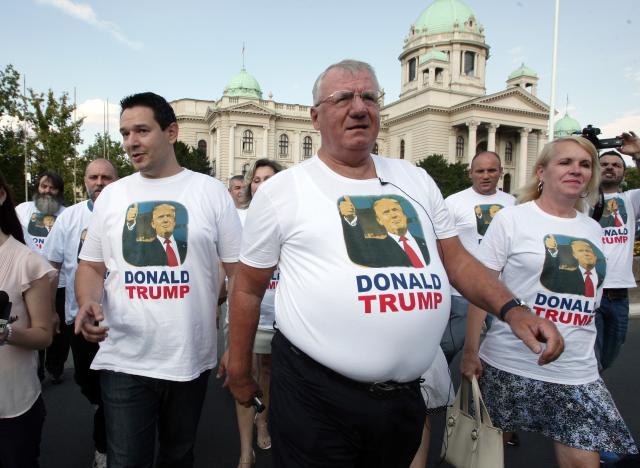 The protest was not held in front of the Presidency, as announced, but in front of the Belgrade City Assembly, after the police prevented those gathered from approaching the building.

In his address, SRS leader Vojislav Seselj reminded those gathered of Biden's past statements about Serbia and her people, calling him a criminal who nevertheless enjoys state honors here, and declaring him unwelcome.

Seselj said that despite the warm welcome given to Biden by PM Aleksandar Vucic and President Tomislav Nikolic, Serbians remember his role in NATO's bombing of the country in 1999 and his pushing for Kosovo's independence, and "hate him" for those reasons.

The SRS leader then said that Biden "an arch-enemy of the Serb people" who in the past described Serbs as "child killers, rapists, illiterate degenerates, aggressors, and butchers."

Seselj's message to Serbs who live in the U.S., meanwhile, was to vote for Donald Trump in the upcoming presidential election.

"Vote Trump, vote for Serbia's future," he said, adding that Trump was "one of a few who have sought apology for Serbia."

"He is a friend of Russia and wants agreement with Russia... vote for him, because he is a friend of the Serb people. Trump is the only one who can destroy all the backroom dealings, he can do it, and I'm convinced he will succeed... he is sincere, honorable, he brings peace and pride to America," said the SRS leader.

The protesters carried banners in English, reading, "Biden and NATO, get out of Serbia."

Police in riot gear secured the gathering that lasted about 20 minutes.