Judging by the composition of his new cabinet, Serbian PM Aleksandar Vucic "still intends to balance between Russia and the West." 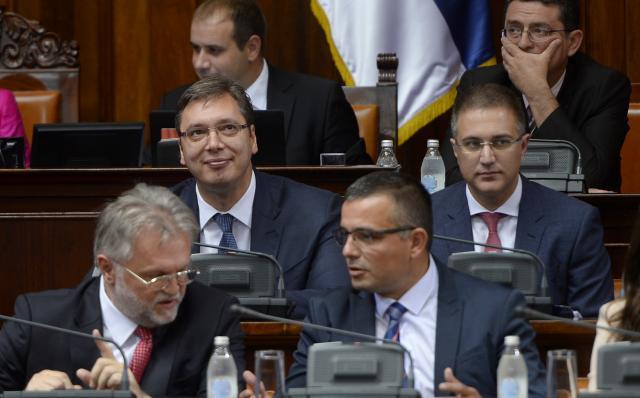 This is what the Moscow-based newspaper Kommersant is writing on Wednesday.

Beta news agency is reporting excerpts from the article, which states that "the interest in the composition of (Serbia's) new government increased after Vucic's unexpected visit to Moscow on May 26," and recalls that President Vladimir Putin publicly expressed his hope that "whatever the new government’s composition, it will give a worthy place to people who give serious attention to developing the relations between the Russian Federation and Serbia."

The newspaper also added that "many Serbian politicians and experts" have assessed this to be "Kremlin's condition for assistance to Serbia" - but are now finding "no obvious indication that Vucic took into account the wishes of the president of Russia."

The article, written by Gennady Sisoev, goes on to say that "among those who can be conditionally regarded as pro-Russian politicians" is the leader of the Socialist Party of Serbia Ivica Dacic, who has kept his job in the cabinet. Beside him, Aleksandar Antic from the SPS is in charge of the energy sector, " where the key role belongs to NIS, which is controlled by Gazprom."

The daily said it was "expected" that a new deputy prime minister's position would be created - or that of a special government representative for relations with Russia" - but that this did not happen. According to the article, "SNP leader Nenad Popovi, who has a business in Russia, was seen in that job."

The new cabinet does not include the Democratic Party of Serbia (DSS) and Dveri, who call themselves pro-Russian, continued the article, adding:

"From this it follows that Vucic intends to continue to balance his foreign policy between Russia and the West."

Kommersant also estimated that "a new test for such a course" will be the upcoming visit of Russian Prime Minister Dmitry Medvedev in the fall, "during which the question will inevitably be raised of the diplomatic status for the Russian staff of the humanitarian center in Nis."

So far, the daily said, Belgrade has opposed granting such a status "due to the harshly negative position of the West."