PM-designate Aleksandar Vucic on Tuesday presented the program and members of his proposed cabinet to the Serbian National Assembly in Belgrade. 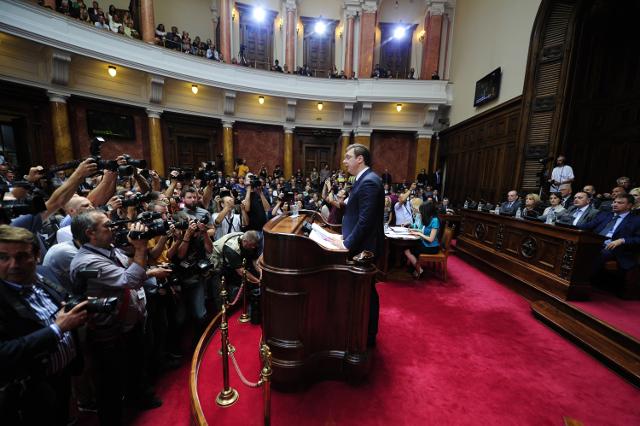 Vucic speaks in the Assembly on Tuesday (Tanjug)

National Assembly President Maja Gojkovic scheduled the continuation of the special session, with the election of the government and a taking an oath of government members on the agenda, for Wednesday at 10:00 CET, the government said on its website.

At the start of the session today Aleksandar Vucic thanked former Austrian, Romanian and Italian officials, Alfred Gusenbauer, Victor Ponta, and Franco Frattini, who are presented in the hall.

Starting the presentation of his keynote address ("exposé"), Vucic spoke about the changes that have taken place over the past years, and then focused on the economy and the building of Serbia's credibility in the region and in the world, Tanjug has reported.

The PM-designate, who has been at the helm of the Serbian government since the spring of 2014, said he would not allow his country "to turn back, or grind to a halt."

"We will do our best for that," Vucic said, and added:

"I am not in the parliament today just to form the new government, "but also for all of us to raise the bar together and answer the question of how much we can achieve, test our capabilities and limits, see if we are small as a country or we can be big, whether we will manage to climb or we will slide, and whether we will be able to push the limits of our work, education, vanity and resignedness to how much and what we are able to do."

The government is not here to serve selfish interests, but to be responsible for pushing the limits and raising the bar, he said.

"I have no intention of doing this job once I am no longer able to do more and win more for our country - we decided to do this job because of the responsibility, not because of fame," Vucic said.

"There is an obligation towards Serbia and its citizens to be better in order to make the country better and enable people to live better. People have had enough of fairy-tales and myths and that is why they consented to tough measures and austerity," he said.

Prosperity and higher living standards for all citizens are the objectives of the new government, Vucic continued, announcing salary increases in the public sector.

"The last time I addressed depities I was told we would have salaries that would be half of what they had been in the previous period. Today we have higher salaries than we had then - primarily thanks to a rise of salaries in the private sector," Vucic said.

In the public sector, the police force and defense and military personnel as well as the social welfare, health care and education sectors can expect further salary increases, which will not be small, Vucic said.

The goal is to increase growth by boosting spending, rather than just by boosting exports and investments, he said.

According to him, 124,000 jobs were created from 2014 to 2016 with an average of more than one factory opened each month, the national currency stabilized and inflation kept at low levels.

Economic, regional and political stability is a condition for new foreign and domestic investments, and stability is also bringing good international reputation and respect for the country because it is able to manage on its own and because it is a sovereign, trusted country that is a dependable partner to its friends, Vucic said.

The previous government achieved stability and the new one will work even harder to achieve prosperity and progress, he told deputies.

The Serbian government will continue to pursue a pro-active, clear and well-thought-out foreign policy that will contribute to the country's better position at regional, European and broader international level, Vucic, adding that "as in the previous period, the focus will be on strengthening Serbia's international position and reputation."

"We will focus on intensifying bilateral dialogue and multilateral cooperation with countries around the world to ensure a continued and effective promotion and accomplishment of Serbia's foreign policy interests and priorities, primarily with the aim of speeding up EU integration and preserving the country's territorial integrity and sovereignty," he said.

According to Vucic, affirming Serbia as a pillar of regional cooperation - constructive, strongly committed and actively engaged on improving regional relations - will be among the government's priorities.

As regards Kosovo and Metohija, defending the country's sovereignty and territorial integrity will also be in the focus of government activities, he said.

"That includes engagement on preventing new recognitions of the unilaterally declared independence of Kosovo and its membership in international organizations beyond the framework of the 2012 Agreement on Regional Representation and Cooperation," Vucic said.

He also told the Assembly that the future government's goal was to close all negotiation chapters in the EU accession talks by 2019 and the end of its term.

EU membership is one of the strategic commitments of the government as we want to see Serbia in the club of the world's democratic and most highly developed countries, Vucic said.

"If 28 European countries were able to do this before us, Serbia can do it, too," Vucic said, noting that there was no time to analyze why Serbia was on the "last train" to membership and why it had failed to make better use of the past decade or two, when the "schedule was slightly busier."

The path towards the EU will abound in political challenges, but we will not judge the challenges by those imposing them, but by their effects on our society and citizens, Vucic said.

"Our relationship towards European integration has not been based on euphoria, but on responsibility, the truth and realistic possibilities for Serbia's progress. We have never, and we never will, measure Serbia's progress by the number of chapters opened, but the number of jobs created and improvement in the citizens' living standards," Vucic said.

The new Serbian government will be an advocate of peace and stability in the region and the biggest obstacle to all those who want to destabilize Serbia, push it down and halt its development, Vucic said on Tuesday.

In difficult geopolitical circumstances, in particular after Brexit and the failed military coup in Turkey, steering Serbia's policy is increasingly hard and complex, he said.

"Individual countries in the region, such as Croatia, are opening old wounds for political gains, jeopardising regional stability. Things are not easy in the relations with Bosnia and Herzegovina either - statements by officials and the failure to try those who have committed crimes particularly make things more difficult," Vucic said, adding:

"Serbia's message is that it will prosecute Serbs who have committed crimes, as well as all other perpetrators who are in our territory. The only thing we are asking for is that criminals be held to account regardless of their nationality, everyone's life is worth the same."

We will create conditions for better relations but we will know how to protect our national interests, he said.

Although there had been announcements that the program Vucic was presenting on Tuesday would be several hundred pages long, the material given to the members of the assembly ("people's deputies") contains 68 pages.

Vucic explained that the document he prepared is "about 250-260 pages long" but that deputies received "only the basics."

Some opposition deputies - from the DS and SDS parties, and the Enough is Enough Movement, left the room before Vucic started his presentation,and later addressed the public to explain their gesture.

Earlier, deputies from opposition DS and DSS parties spoke to complain that they received the material too late and have not had enough time to prepare, asking Assembly President Maja Gojkovic to postpone the session.

But Gojkovic refused this request, saying that she in the past scheduled sessions to elect a government in the same manner.

The debate that will follow Vucic's address is scheduled to last five hours; however, considering that deputies have a right to rebuttals, the session could last considerably longer.

The 68-page keynote address (Serbian only):

The cabinet proposed by PM-designate Aleksandar Vucic will have 19 ministers, including three ministers without portfolio.

Vucic's SNS party will lead the government, with three ministerial posts going to their coalition partners the SPS. Several non-partisan figures will also be members of the country's new cabinet.

The government will have eight new names, while six ministers from the previous composition have been left out.

National Assembly President Maja Gojkovic expects "a substantial and serious debate" and the election of the proposed government by the end of the week.

Vucic has announced that he will be presenting his exposé for several hours, followed by a debate on the government's program and on its members, and a vote to elect it.

The Serbian National Assembly decides on electing the country's government in a secret vote, unless a decision is made to vote by roll call. A government is elected by a simple majority (126) out of the total number of people's deputies (250).

The government's mandate starts from the moment the oath of office is taken before the National Assembly.

After the oath is taken, the prime minister and the members of his cabinet sign the text of the oath and hand it over to the president of the National Assembly.

Ministers without portfolio will be Jadranka Joksimovic, Slavica Djukic-Dejanovic and Milan Krkobabic