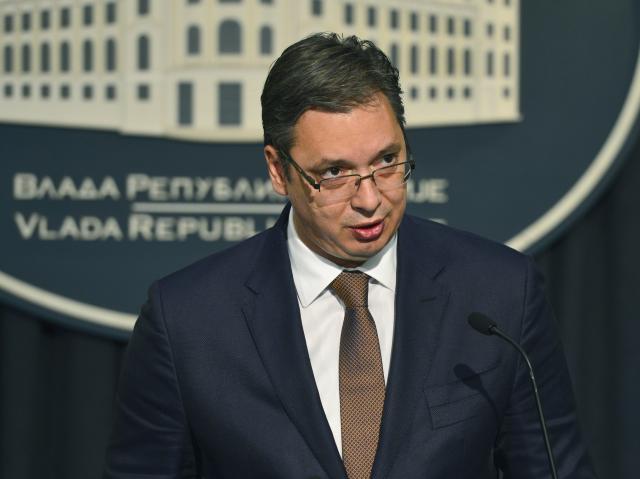 A team is needed that will kick-start and irreversibly change Serbia, he added.

That is why, said Vucic - whose SNS party won 131 out of 250 seats in Serbia's National Assembly on April 24 - it has been taking him a long time putting together this team.

Vucic, who currently heads the caretaker government, also said he "does not want those who are not prepared to admit they don't know everything" in his new cabinet.

Instead, Vucic continued, they must "make a lot of effort in order to learn."

"Because I know that only the right team can help me revive the energy and the faith of those who voted, to kick-start and get that enthusiasm, that Serbia gets it, which is needed for it to change irreversibly. And to continue to improve," Vucic said in an interview for the Ekspes weekly.

Vucic went on to say it was "a big thing" to see some report about some EU fund willing to give money to Serbian farmers, on condition that they attend certain courses.

"And then a bunch of them says, what do I need that for, I know all that, let them give me the money and they'll see. What, brother, will be seen, and by whom? By those whose yields are so many times higher than ours thanks to the knowledge and technologies, and who now want to convey that knowledge to us... Not to give us the fish, but to teach us to how to fish. And we, who are willing to refuse all that because we supposedly know it all?! This is our biggest problem and what scares me the most. And that is the reason why I am dealing so much with the team I need to put together," said he.

The PM-designate also revealed that he considers politics "a question of results, not love and hate," and that "it's not important whether I like or dislike someone but whether or not they can do something, because I'm not the only one who likes results, everyone needs them."

"So, if we're talking about the sentence that solves the question of the next government, it will have no commas or figures of speech, quotation marks, and especially no adjectives. It will be short and simple, two words and one conjunction. Work and results. Period," Vucic has been quoted as saying.

He also revealed he had "no personal fears" - as he has "replaced them with what is known as responsibility - because fear is insoluble, and hence irrational, even when it is realistic."

"Responsibility makes you work, find solutions, observe the reality rationally as something that is given and that you can change at least to some extent through your engagement. When I chose responsibility problems ceased to be merely problems and became a challenge," said Vucic.