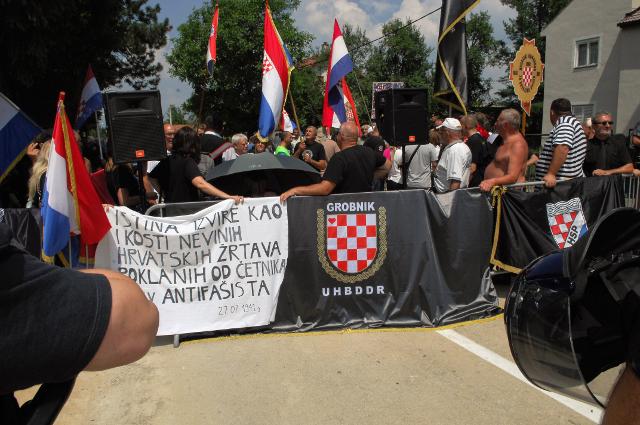 A scene from Srb on Wednesday (Tanjug)

July 27, celebrated as Anti-Fascist Uprising Day in Croatia until 1990, was marked yesterday in Srb, a town in Croatia's Lika region. The gathering was marred by incidents staged by Croatian right-wingers.

Dacic late on Wednesday issued a statement regarding the events in Srb, and regarding Croatian Foreign Minister Mira Kovac's comment about Serbia's protest note sent to Croatia earlier in the week being "reminiscent of Milosevic."

"Maybe our protest note reminds Minister Kovac personally of Milosevic, which is certainly not true, but the resurrected Ustashas today in Srb do not resemble anything or anyone - they are the heirs of the fascist Ustasha NDH and Ante Pavelic," Dacic said, referencing the fascist Independent State of Croatia (NDH), and its leader. This entity that existed during the Second World War was ruled by the Ustasha regime, that operated death camps for Serbs, Jews, and Roma.

In his statement, Dacic said that contrary to Kovac's claim, the Serbian protest note did not contain any false quotes. The note concerned a Croatian court's decision last week to annul the verdict passed against Croatian Catholic cleric Alojzije Stepinac in 1946.

According to Dacic, the statements made by Stepinac were quoted verbatim in the protest note - those he made on Easter 1941 in the Zagreb cathedral, where he preached loyalty to the fascist NDH, as well as a quote from his indictment, where he tells bishops that the NDH is the most significant event in the life of the Croatian people.

Dacic added that while Hitler is a symbol of evil "for Germans and for the whole world - for Croatia, the NDH is the achievement of the Croatian dream."

"Pavelic is a symbol of heroism, and with him and his priest Stepinac, a symbol of holiness. Proof of this are the scenes of the Ustasha rampage in Srb. Serbia wants good relations with Croatia, but not at the cost of war criminals being transformed into alleged martyrs," he concluded.

The organizers of the event marking 75 years since the anti-fascist uprising in Srb were the Serb National Council in Croatia, and the Union of Anti-Fascist Fighters and Anti-Fascists (SABA).

Croatian media reported that the town was "under police siege" on Wednesday. The gathering went in the shadow of a series of incidents, threats and provocations made by members of the right-wing Autochthonous Croatian Party of Right, and their supporters.