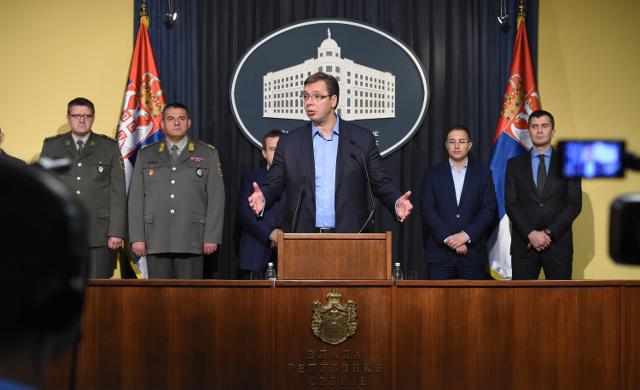 They will "jointly execute tasks in preventing the illegal entry of migrants from Bulgaria and Macedonia, and bring to justice human traffickers operating on Serbian soil."

After the meeting of the Bureau on Saturday, Prime Minister Aleksandar Vucic said that the main topics were "the events in Turkey, the migrant crisis and its consequences for security, legal order and economic future of Serbia, situation in the region, terrorism and its prevention, and the way to counter possible terror acts."

Speaking on Saturday, Vucic would not reveal the size of the newly-formed teams, saying they would be "Sufficient to ensure border security, primarily toward Bulgaria and Macedonia, as these countries were where most migrants come in from," Beta said.

Vucic said Serbia had shown solidarity with all of the victims of the conflicts in Middle East and Africa throughout the migrant crisis, but that a great majority of the 2,700 migrants currently in Serbia came from Afghanistan and Pakistan, which means their chances of asylum in the European Union are "almost nil."

"Serbia cannot be a parking lot for Afghanis and Pakistanis whom nobody wants to see, let alone admit into their country," Vucic said.

He added that no force would be used against the migrants, but that people smugglers and criminals profiting from their misfortunes would be treated strictly and according to the law. He also said the smugglers' vehicles and money made from the crime would be seized.

"Whoever asks for asylum in Serbia will be received in a reception center, and whoever does not will be removed from Serbian soil according to the law," the prime minister said, adding that Serbia would not build walls along its borders, but that it could not tolerate illegal activity.