Vucic still doesn't know who will be in his new cabinet

PM-designate Aleksandar Vucic said on Wednesday that "any talk about a date when the government will be formed would amount to speculation." 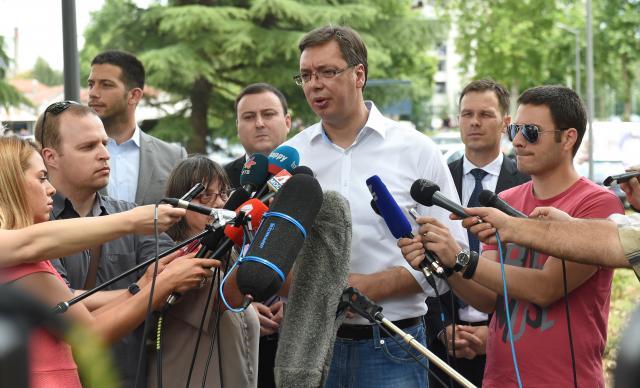 The SNS leader also said that his cabinet will certainly be formed within the legal deadline, and "before Britain gets its (new) prime minister" - something that has been announced for October.

"I still don't have the final composition, but there will certainly be people capable and determined to carry out reforms," Vucic said, adding that while he was "yet to define his team - the goals have already been defined."

"There will of course be people from the party, but also those who are not from the SNS," he said.

He also told reporters in Obrenovac that he was "not certain that his government would be formed before the opening of (EU accession talks) chapters on July 19."

He also said it was "not easy to say" whether Serbia was "closer to getting a government" after EU's decision to open chapters 23 and 24.

Speaking about the decision to open these chapters that had been blocked by Croatia for several months, Vucic said that "nobody, including Croatia, put new conditions before Serbia."

"They did not put a single one before us, whether they had some conditions that they put before somebody else I don't know, nobody spoke to me in that way. That the chapters will be opened on July 18 or 19 I heard from top EU officials, so that is something we expect to happen," he said.