SNS deputy Igor Becic has been elected as chairman of the Committee on Control of Security Services of the Serbian National Assembly. 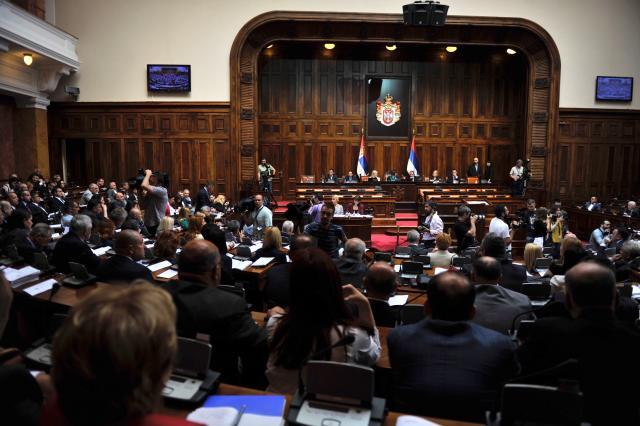 His deputy is Dusan Bajatovic (SPS).

Six members of the committee voted in favor of Becic's appointment, while one was against.

The first sitting of the committee was marked by exchanges between its members, while SRS leader Vojislav Seselj, who initially presided over the meeting, at one point interrupted the proceedings, claiming that Becic was involved "in various criminal affairs."

Meho Omerovic (SDPS) then took over from Seselj.

"The ruling majority can do what it likes, but they won't be able to do it for as long as they want," Seselj said after he announced that the meeting was suspended.

Becic was proposed for the position by Marija Obradovic (SNS), who emphasized that he has been a member ("people's deputy") of Serbia's Assembly for many years, and had "years of service and experience" related to the defense sector.

Democratic Party (DS) deputies objected to a lack of consultations ahead of the committee's meeting today, with Radoslav Milojcic saying he "had nothing against Becic, who is merely a consequence of the arrogant and incompetent rule of the SNS."

"It's not his fault, but Vucic's, who makes all the decisions. The SNS has created a country where the Communal Police indirectly killed a man. You have rendered this committee and all institutions meaningless. There is one man who is the ruler of life and death, and that is Aleksandar Vucic, and we will vote against," Milojcic said during the committee's session on Tuesday.

Vladimir Djukanovic (SNS) reacted to say he failed to hear any concrete objection to the proposal to elect Becic as the chair, and that the committee's members instead heard a political tirade.

"You created the Communal Police, you gave them their powers. You elegantly interfered in the work of the judiciary and we were unable to open any chapters. Judges were appointed based on political suitability," said Djukanovic.

Enough is Enough Movement leader Sasa Radulovic said that it would have been appropriate if the committee's members received the candidate's CV, even though the rules of procedure do not require it, and added that his party would vote against.

"The SNS has decided to put its people in all the key positions in committees, and that is not good. The opposition is criticizing, and then behaves the same once they come to power. That practice ought to end," said Radulovic, noting that the rules of procedure "also should be changed."

Obradovic observed that the opposition "does not know the rules of procedure" urging at the same time that those be respected, and then distributed Becic's CV, noting that the deputies "ought to know who this is."

"The way you praised him, I thought we had before us Nikola Tesla's CV," said Milojcic, adding that "nobody's under any obligation to follow Becic's resume."

Sasa Radulovic eventually left the meeting, saying later that Seselj was right to interrupt it, "although his motive was to create a circus, which the SNS then turned into an even bigger circus."

A statement issued by his party said that despite the session being interrupted, SNS deputies went on to "illegally elect Becic as the committee chair."