Thousands of people showed up for a new protest march in Belgrade on Saturday, organozed over the April 24 demolition in the capital's Savamala district. 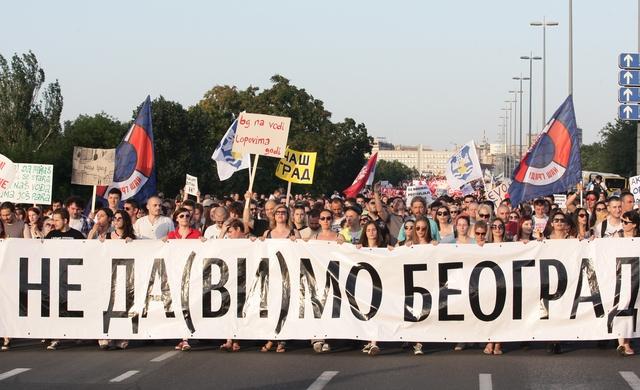 The protest, organized by the "Don't Drown Belgrade" initiative lasted about two hours. According Beta agency, some 20,000 people took part in the march.

N1 broadcaster reported, quoting police figures, that there were about 5,000 protesters.

Beta said that the organizers "reiterated once again that they would insist on holding Belgrade Mayor Sinisa Mali, Interior Minister Nebojsa Stefanovic and Belgrade municipal police chief Nikola Ristic accountable politically and criminally," and added that "the purpose of the demonstration is to make Belgrade a free city and that the rallies would continue until all the demands have been met."

"As long as the lies grow, the duck will grow," they said, referring to the symbol of the protest, a large yellow rubber duck.

Beta noted in its report, quoting eyewitness accounts, that the demolition in Hercegovacka Street was carried out by "men wearing ski masks with excavators, who imprisoned the witnesses in a hangar," and that the police "directed people calling for assistance to the communal police, which did not respond either."

PM-designate Aleksandar Vucic said earlier this month that top authorities of the city of Belgrade were behind the demolition.