President on Savamala affair: Those responsible must go

President Tomislav Nikolic says that if "an elected person" was responsible for the demolitions in Belgrade's Savamala district, they cannot remain in office. 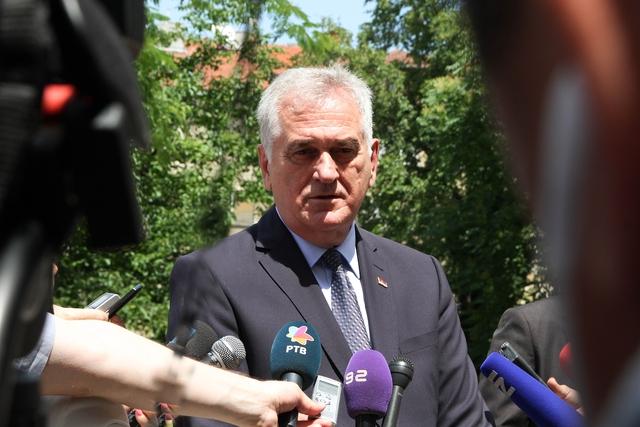 Nikolic is seen in Novi Sad on Thursday (Tanjug)

Nikolic made this statement on Thursday - a day after Prime Minister Aleksandar Vucic announced that top city authorities in Belgrade were behind the April 24 nighttime demolition carried out by masked persons.

In addition, the president continued, "if the responsibility is on state organs that acted illegally under pressure - then there must be dismissals there as well."

Asked by reporters what outcome he expected "considering that in previous similar situations, as in the (military) helicopter crash, there were no rulings," Nikolic replied: "Serbia has not disappeared, so that one could say an investigation never finished."

"There is no country in today's modern world where anything could be covered up, and in Serbia in particular, where the media are more free than they are constrained. They have much more freedom to do what they want, than are bound by any law or code to guard at least a little dignity of their profession," said the president.

He reiterated that he is not the one to be asked about the outcome of cases such as Savamala, adding that the prosecution was the right address.

"Go to the Prosecution and ask. I have not seen someone talk about this with the prosecutors," Nikolic observed.

He added that he did not wish to influence PM-designate Aleksandar Vucic with his statements, and was "merely offering (his) advisory role."

"Consultations have just finished, and he (Vucic) probably now has a clear picture of who will join the new government of Serbia. That is a huge responsibility and he will have the right to first say what the Law on Government and Ministries will look like, and then personnel decisions, because in the end all success or failure will be attributed to him," said Nikolic.

According to the president, some representatives of ethnic minority parties want to be in government, "and it is good for Serbia, because it will provide additional stability."

But Nikolic did not wish to talk about which "big parties" might join Serbia's next cabinet, or about "personnel solutions" - including whether Socialist Party of Serbia officials will be among them.

The president made the comments in Novi Sad where he on Thursday attended the celebration of the 90th anniversary of the Archives of Vojvodina, and opened an exhibition of original documents in the province from the 12th to the 17th century.