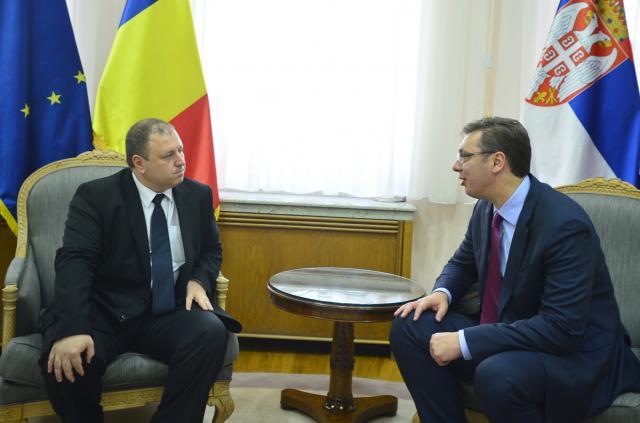 According to the Serbian government, Vucic "thanked him for his cooperation and personal contribution to the promotion of relations between Serbia and Romania."

Vucic "noted that the political relations between the two countries are good and underlined that Serbia appreciates the support and technical assistance that Romania offers it on its European path, as well as the principled position of that country not to recognize the unilaterally proclaimed independence of Kosovo."

He "stressed that Serbia is always ready to resolve outstanding issues, to resume economic cooperation and implement joint infrastructure projects" and wished the ambassador success in his future professional engagement.

Banu gave Vucic a letter of congratulations from Romanian Prime Minister Dacian Ciolos regarding "Vucic’s victory in the recent parliamentary election," the government said on its website, adding that the letter "stressed the results of the election have demonstrated the commitment of the citizens of Serbia to joining the European family."

The prime minister of Romania expressed his conviction in his letter of congratulations that the government led by Prime Minister Vucic will lead Serbia with "resolution towards its main goal – accession to the EU, which Romania continues to support strongly. In addition, the prime minister of Romania commended the close Romanian-Serbian dialogue over the last few years and expressed readiness for further intensification of cooperation between the two countries," the Serbian government announced.

Banu said he it was a privilege to, during his tenure, "witness the changes and great progress of Serbia, as well as the improvement of relations between the two countries."

He said that this is reflected in the increase of trade to around €1 billion, the opening of new border crossings, the forming of the Craiova Group with Bulgaria and good cross-border cooperation in the use of EU funds.

Asp noted that, in the six years of his time as ambassador to Serbia, "the country changed much in a very positive way, adding that he is confident about Serbia's future considering the excellent economic results of reforms and other government measures," Tanjug reported.

Vucic said that it was his pleasure to work on strengthening Serbia's relations with Sweden by cooperating with Asp.

Vucic noted that his visit to Sweden last year and the upcoming visit to Serbia by his counterpart Stefan Loefven are "an indication of major progress in the cooperation between the two countries."

The prime minister said that Serbia appreciates Sweden's support, reflected in substantial bilateral aid for enhancing the rule of law and for the public administration reform and environmental protection in Serbia.