Vucic says he was bad information minister in late 90s

Freedom of expression, thought, conscience and religion is the most significant freedom in contemporary humanity, but it is often abused, says Aleksandar Vucic. 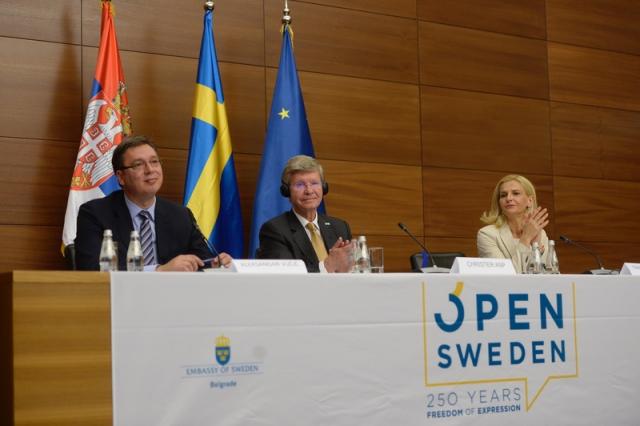 That is why it needs to be accompanied by responsibility, the outgoing Serbian prime minister, who has been given the mandate to put together a new government, said on Monday.

That freedom is frequently used rightly, but also abused, especially for political purposes, Vucic said at a Belgrade conference marking the national day of Sweden.

Absolute freedom cannot exist, Vucic said, adding that there can only be freedom that is accompanied by a certain type of responsibility, which he said was "non-existent in Serbia."

"It would be good if we learned from Sweden about freedom, and even more so, about responsibility," Vucic said, adding that the Serbian constitution guarantees freedom of expression.

It is important to build an openness of discussion and debate in society without depriving others of their rights, irrespective of differences in opinions, he said.

Speaking about media freedoms, Vucic said that Serbia has passed the "best laws" pursuant to the positions of the Venice Commission.

He then criticized "those who lecture others all day long without wanting to see their own mistakes."

"Those who lose elections never say it happened because they worked less, were less diligent, or less smart, or had worse policy - the reason for the defeat is always insufficient media freedoms. They claim they are the best in the world and would have won 48 percent if only they had been on TV more," said Vucic.

Speaking about 1998 and 1999, when he served as minister of information, Vucic described his performance as unsuccessful, and himself as "a minister who did his job very badly" - and said the reason was his inability to stand up to "certain legal norms proposed by others."

He also said his government would "work hard, make an effort to change and be better."

Speaking about the opening of chapters 23 and 24 in Serbia's EU accession negotiations, Vucic said this no longer depended on the Serbian government, considering that "everything that could have been done had been done."

"If those chapters are opened it will be up to us to work hard and all of us to be incomparably better," he added.

Vucic also thanked Sweden as one of the biggest bilateral donors.