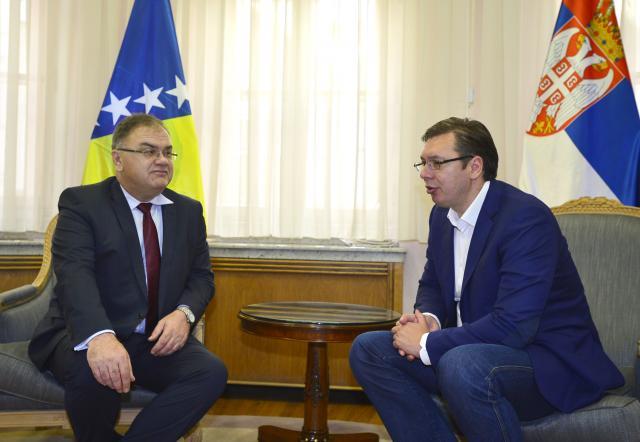 Ivanic briefed the head of Serbia's caretaker government, who has been given the mandate to put together a new cabinet, about "the recent deterioration of the political situation and inter-ethnic relations in Bosnia-Herzegovina."

After many years, Serbs in the Bosnia-Herzegovina again feel alone, Ivanic told Vucic, adding that he feared the practice of outvoting Serbs in Bosnia-Herzegovina state bodies - which began with the decision on the census - would continue and that Serbs' national interests would be threatened.

Vucic "thanked Ivanic for the information and for his responsible actions aimed at protecting the vital interests of both Bosnia-Herzegovina and the Serb people in it," a statement from the Serbian government said.

The statement added that "due to the newly created circumstances" Vucic and Ivanic agreed to meet more often "and exchange information and opinions."

Serbia has been investing major efforts in maintaining stability in the region, but does not always have support from neighboring countries, Serbian President Tomislav Nikolic said on Tuesday in a conversation with Mladen Ivanic.

“Certain politicians often provoke tensions in the region, for their own narrow-minded, but short-term political benefits, and thus harm the reconciliation process among citizens and states,” Nikolic said.

This is particularly true for Bosnia-Herzegovina, in which the situation is rapidly deteriorating.

“The future of the entire Balkans lies in cooperation, in strive to accept European standards, and the pre-requisite for the cooperation must be peace and stability, above all, and Serbia is insisting on this,” the president said.

Ivanic has noted that the recent statements by the heads of the Islamic religious community and Catholic Church in Bosnia-Herzegovina and rhetoric of politicians from the Federation of Bosnia-Herzegovina are pushing citizens back to the early 1990s, the president's press service said in a release.