President Tomislav Nikolic on Monday announced that he had given the mandate to form Serbia's new government to SNS party leader Aleksandar Vucic. 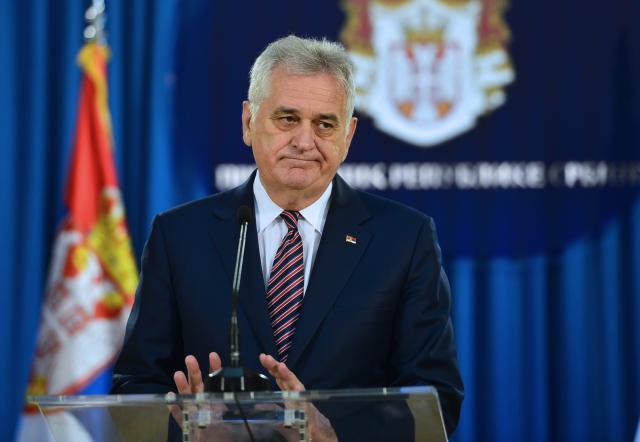 Vucic is currently at the helm of the country's caretaker government, that was elected in 2014.

Nikolic told reporters at the Presidency in Belgrade, after holding a series of separate meetings with representatives of all electoral lists represented in the new National Assembly, that Vucic convinced him he has a parliamentary majority.

Nikolic added that he will inform the Assembly of his decision as soon as it has been constituted.

The president also remarked that only Vucic presented a program of his future government, and its priorities.

"All the others came aware of the fact the SNS had won the most seats, and would rightfully seek seek a mandate to form a government," Nikolic said. A coalition of parties led by the SNS will have 131 seats in the 250-seat assembly. A simply majority of 126 is needed to elect a government.

The deadline for the constitution of the National Assembly is June 4. Serbia's new government must be elected within the next three months.

Addressing reporters today, Nikolic said that this government will face many challenges, "including the situation in the EU, the migrant crisis, the rise of far-right parties across Europe, the economic crisis and the need to ensure sufficient investments in Serbia and enough products to compete in foreign markets, as well as develop the agriculture."

He added that the future cabinet "will have to bear the burden at a time when it is easier to be in opposition."

"In a time of major political turbulence, when everyone is against the government, these are all challenges for the government. I wish success to the government - whoever wins the majority has the right to form a government and be wished success by us," Nikolic said.

The president also revealed that he believes "another of the electoral lists that have secured assembly seats" will join the cabinet led by the SNS - beside the Alliance of Vojvodina Hungarians (SVM) - but added it would "not be fair" if journalists learned which list it was from him.

According to Nikolic, they should hear this "from the one who is putting together the government."