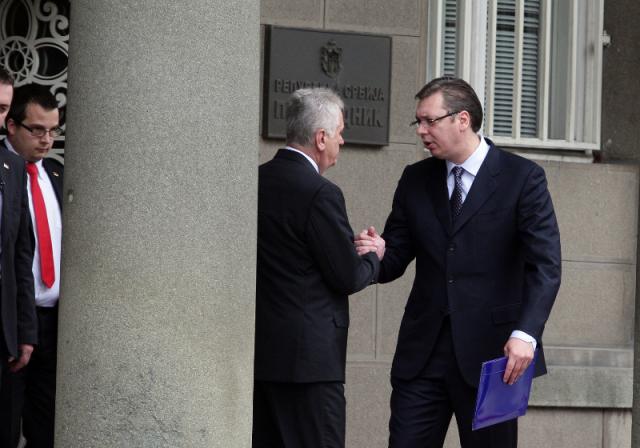 The head of the current, caretaker cabinet made these comments after consultations with President Tomislav Nikolic, and revealed that "all but two" members of his new cabinet have been selected.

But Vucic did not wish to mention any names, nor answer when reporters asked about the parties that might make up a future ruling coalition.

"The government must be formed before the visit of the Chinese president. Whether that will be three, seven or 15 days after the formation of parliamentary bodies I don't know - but within that framework," said Vucic.

Although the pre-election coalition around his Progressives (SNS) on April 24 won 131 seats in Serbia's 250-seat National Assembly - i.e., a simple majority - Vucic on Thursday said it was "possible that someone will come to consultations with Nikolic and say they have a majority."

Speaking about the ministers in his next cabinet, Vucic said he "needs people who will fight" and hinted that some members of the current government who have not been "media favorites" might keep their jobs. He also indicated that "party affiliation will not decide on ministerial chairs."

Vucic then observed that critics "have no real answers when asked how come the government is disastrous, while praise is coming from Europe and the world, and the data about economic growth."

Before the consultations today, Vucic said that "the road to a new government is long" and that he would present to Nikolic his "plan and program" - and talk about where he sees Serbia in the future.

According to Vucic, he and Nikolic today discussed this plan detailing the government work over the next four years, and "generally" reached agreement on the ten key points.

"The things I'd single out are economic development and regional stability," Vucic said.

Meanwhile, a statement issued by the Presidency said that Vucic informed Nikolic he has a majority in parliament to elect his government, while the president "stressed that elections did not stop the progress of Serbia and expressed his expectation that the pace of reforms will be continued."

It is not known when Nikolic will continue his consultations by meeting with other party leaders.

While speaking with reporters on Thursday, Vucic also said he will have enough support in the Assembly to change the Constitution of Serbia, but added it was "more important to achieve a broader social consensus."

"We will not be imposing the Constitution on anyone. We can have 167 deputies at any time, but I will not do that," Vucic told journalists when asked whether there was sufficient support to change the country's highest legal act.

He added that this topic would be discussed with all political stakeholders, but noted that "achieving a broader consensus will be difficult."

A two-thirds majority in the 250-parliament is necessary to pass any changes to the Serbian Constitution.

According to Chapter 23 of Serbia's accession negotiations with the European Union, the country needs make these changes by 2017.