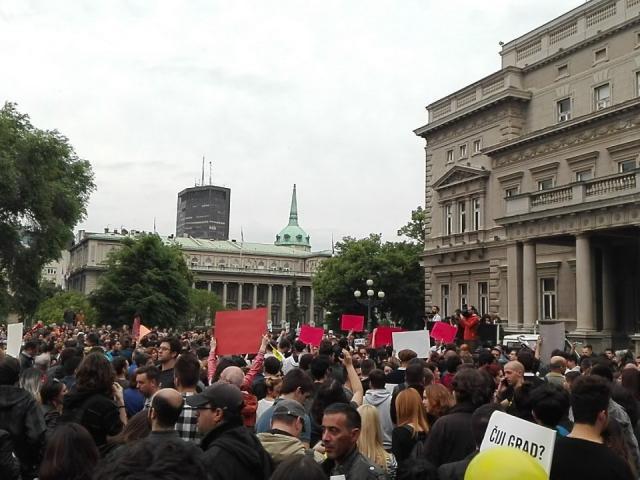 The protest, held under the slogan, "The masks have fallen," and the demands came because of the demolition of buildings in Belgrade's Savamala district, Beta agency reported.

The protesters shouted: "Gang, gang" and "Crooks," and carried banners reading "Whose city our city" and banners with signs of "For freedom," "Today Savamala, tomorrow your home," "The streets belong to us," while the symbol of the Don't Drown Belgrade initiative, a yellow duck, was set in front of the assembly building.

Among the demonstrators were representatives of opposition parties and public figures. After the protest they marched to the Serbian government headquarters.

The buildings in Hercegovacka St. were demolished in the night between April 24-25. According to witnesses, this was done by people wearing balaclavas and using excavators, who also locked some eyewitnesses in a hangar.

"Although people called the police, reporting mistreatment by the masked men, the police did not respond and told them instead to get in touch with the municipal police," Beta said.

Serbian Ombudsman Sasa Jankovic on Monday published his report on concerning the work of the police in that night, which states that police officers were ordered by the top police echelons to direct citizens to call the municipal police.

He on Wednesday said that "the Interior Ministry should apologize to the citizens for leaving them at the mercy of men in balaclavas."

The ombudsman said his report was sent to the police and made public, "where every fact was documented."

"The report should be read first, and then the recommendations it contains should be carried out, so that the event from the election night will never happen again. Everything else is a distraction from this event, which is of huge public interest, and the ombudsman will not participate in that distraction," the statement reads.

Speaking during a news conference on Wednesday, Prime Minister Vucic said Jankovic had not been under surveillance during the control process he was performing in connection with the Savamala controversy.

"I verify that he was not under surveillance. If I'm wrong, then the entire security sector will be replaced," Vucic said, adding that he had not read the ombudsman's report about the demolition in Savamala because, as he said, he did not have time for that.

Asked whether the state was behind the demolition in Hercegovacka Street, Vucic replied that he was "certain that it was not."

"If someone from the state is, then he is a complete idiot and should be held to account. Had he performed the demolition in broad daylight, that would have been great," Vucic said.