Serbia will turn to the Lausanne-based Court of Arbitration for Sports in the wake of UEFA's decision on Tuesday to allow Kosovo to join its ranks. 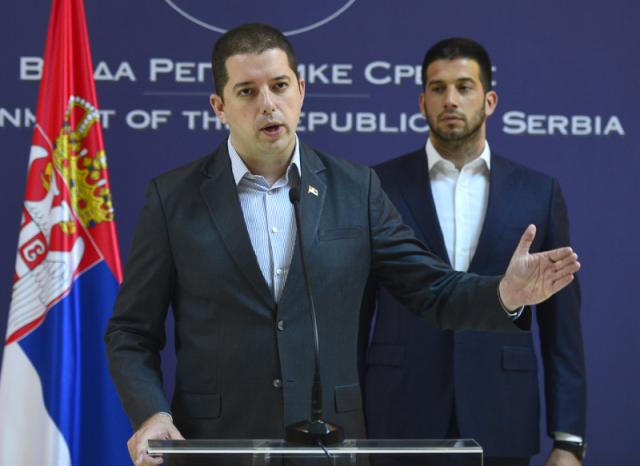 UEFA's move means that sport has been put in the service of politics, Serbian Government Office for Kosovo Director Marko Djuric and Sports and Youth Minister Vanja Udovicic told a joint news conference in Belgrade.

The state will help the Football Association of Serbia (FSS), "so that the decision does not go smoothly, and as the separatists imagined."

Udovicic and Djuric also said that the UEFA congress in Budapest trampled on the organization's own statute and rights, and put sports in the service of politics.

Djuric added that the decision could turn out to be a path toward new divisions in the house of European football, "and bring up many other issues, considering that associations from other territories have already expressed an interest in membership in this organization."

"This opens Pandora's box," said Djuric, noting that Serbia has 24 UEFA members on its side - those who voted against Kosovo's admission - "and two more who have abstained."

This official remarked that the fact 11 countries which have recognized Kosovo are among them "speaks to the awareness of athletes and sports associations being on a high level."

Djuric also said that "the opponent side has lost because it failed in its attempts to change the UEFA statute, which still stipulates that only UN members can join the organization."

That is the main argument, he said, in favor of a final decision being made in Lausanne.

"Those who think we will stop fighting nurture illusions. We will never lose, as long as we keep fighting," Djuric stressed.

Vanja Udovicic also described UEFA's vote as "the opening of Pandora's box" paving the way toward "some new appetites," while "bringing down all the principles that UEFA stood for."

"We will use all our contacts, including personal, in order to overturn this decision," said the minister, adding that "high level negotiations on this issue are now expected."

Udovicic said UEFA's move today meant that "sport was on the losing end," and that it sent "a concrete message that politics exists in sport on the international level."

Asked whether Serbia now planned to boycott competitions, he said it was "neither the time nor the place to prejudice such decisions."

Udovicic also thinks the fact UEFA did not change its statute "means that Serbia is on the good path and is supported," and described it as "the start of further struggle."

"In the jaws of politics"

Kosovo's admission to UEFA membership is a political decision and a defeat for football, which could face unforeseeable consequences as a result, Football Association of Serbia (FSS) President Tomislav Karadzic said on Tuesday.

"Football has found itself in the jaws of politics and this is a UEFA move that could have unforeseeable consequences. For four years, the FSS fought and repelled all attempts by the self-proclaimed state (Kosovo) and then we suffered the biggest blow at the hands of the International Olympic Committee, whose admission of Kosovo was particularly highlighted by the Kosovo delegation. The FSS and our struggle became an obstacle to many, but we were unable to prevent a political abuse of football," Karadzic told the FSS website.

The governments of 38 UEFA member states have recognised Kosovo's independence and their football associations had to follow instructions from politicians, Karadzic said, adding that European football's governing body should not have yielded to political pressure.