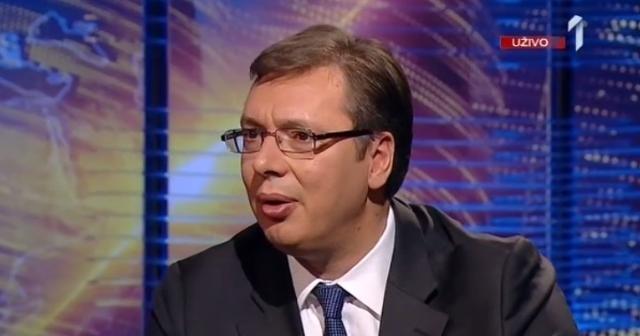 The leader of the Progressives (SNS) and the head of the current, outgoing government, spoke for TV Prva late on Thursday, to say he would form a government "with good people," and add:

"Perhaps these people will not be to everyone's liking, but there will be experts and politicians."

"I'm glad the SPS (Socialists) has its wishes. Only the SNS has no wishes at all. It's our list, plus the SVM (Alliance of Vojvodina Hungarians), and we'll see if there'll be some more people, and if I wanted I could have 190 MPs in 24 hours. With the SVM and the Socialists, and Seselj, who said he was willing, if we left the European road - that's 190."

He added that this number "could go up to 210" but that he did not want this outcome "because it would mean a return to the old, bad policy."

Speaking about the results of the April 24 snap parliamentary elections, Vucic said he was "glad to see how much joy crossing the threshold causes in his political opponents."

He described his party's election victory as "historic and impressive - considering there is no record in the European practice of the second-placed party in elections receiving as many as 37.5 percent less that the winner."

Vucic rejected accusations of electoral theft coming from the opposition and aimed at his party, and said that "the results of the election are known" - while there was "great pressure on the Republic Electoral Commission (RIK)."

He added that the commission would declare final results "next Thursday or Friday at he latest," and that the National Assembly would be constituted 20 days after that - "and then soon after, the government."

He accused opposition parties of "creating a circus around election results" in their bid to postpone the forming of the provincial government in Vojvodina.

During the interview, Vucic also described himself as "the proudest in the world" because he is able "to do much for his people" as prime minister, and ruled out the possibility of running for president in 2017.

He also denied that presidential elections would be held simultaneously with another early parliamentary vote next year.

Vucic then revealed that he felt "old" because of "this tiresome circus after the elections," and added:

"I will not be doing this job for much longer, but I want Serbia to be in front of the door of the EU, for our country to be much more successful, much better."