The Serb Progressive Party (SNS) announced on Tuesday it is requesting an election recount, and access to all electoral materials. 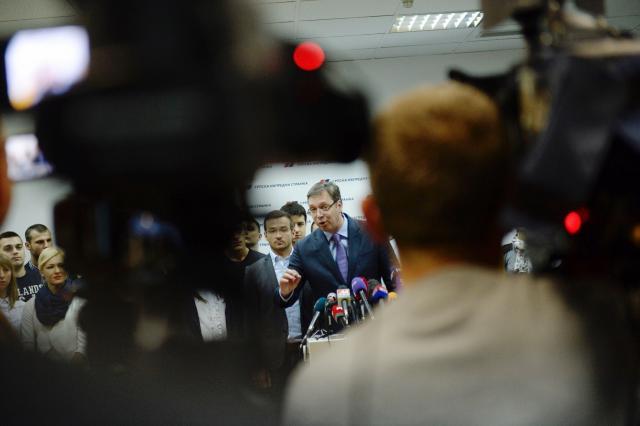 This came only a day after a group of opposition parties formed its legal team to analyze the material from the April 24 elections, in which the SNS took nearly 50 percent of the vote.

SNS leader Aleksandar Vucic confirmed on Tuesday that the party will review the entire election material and repeated his assessment that "somewhat strange things" had occurred after the closing of the polling stations.

The Progressives soon afterwards announced that the party's own newly-formed legal team had sent to relevant institutions an official request for an election recount.

"Imagine if I burst into some commission, and suddenly the results changed, everything the way they wanted it to be," said Vucic, in an apparent reference to opposition parties.

His party said in a statement that it warned "on election day, and earlier" that there was "a reasonable suspicion that some political parties and groupings have knowingly violated the electoral process, put pressure on citizens and authorities, used illegal and illicit activities."

According to the SNS, this was done "in order to prevent citizens from express their free will and the basic democratic right to elect a government that will represent them."

The statement added that the SNS "will not allow any violation of the electoral will of citizens."

"It must be clear, and free of signs of abuse and suspicion, because this is the only way for Serbia to become a modern democratic state in which the voice and the will of citizens is sacrosanct," said the statement.

In his conversation with reporters on Tuesday, Vucic said he was "not interested in the stories about what parliament will look like now and whether it will resemble a circus, a cinema, or a theater."

"People vote for the future, what do I care what will happen in parliament. Let them throw and remove their shoes, sneakers, let them do what they want, I'm going to keep working," said the prime minister, and added that the question of where Serbia is heading is the one that's "crucial."

Asked whether he was disappointed because the SNS failed to win in central Belgrade municipalities of Vracar and Stari Grad, Vucic laughed, and thanked reporters for posing the question, noting that these were "rare municipalities in which the SNS did not win."

"Vracar loves the SNS, everyone went together against us there - to have three percent more. In Vojvodina, out of 44 municipalities, we won in 40. We won in Subotica - people, Vracar loves us too, and we are the strongest party there," said Vucic.

He then added he was "disappointed because of those two Belgrade municipalities" and will next time "fight for each vote."