Representatives of opposition electoral lists, who said that irregularities took place during elections on Sunday, will be given access to election materials. 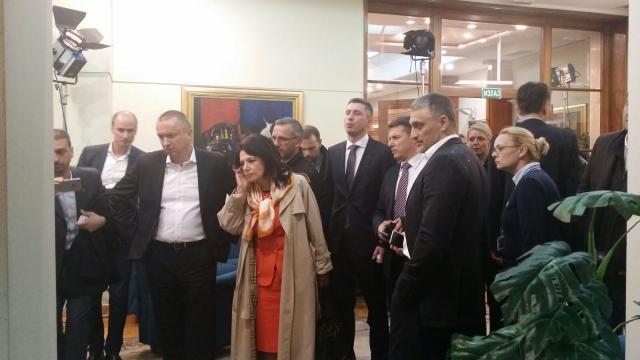 This has been stated by the Republic Electoral Commission (RIK) President Dejan Djurdjevic.

After a RIK press conference held at 03:30 CET on Monday, attended by some opposition leaders, DS President Bojan Pajtic told reporters that the party will be ready to participate in the review of all records "in order to protect democracy, parliamentarism and citizens' electoral will."

Dveri Movement leader Bosko Obradovic said the Progressives (SNS) were behind "a political projection of results" where he claims the party wants to "raise" its own election results, and "lower" those achieved by the political options it dislikes.

Obradovic's opinion was shared by the leader of the Enough is Enough Movement Sasa Radulovic, while SDS President Boris Tadic said the opposition will have to examine electoral materials together and that it was also necessary "to analyze the emergence of 'phantom voters'."

DSS lader Sanda Raskovic-Ivic believes there is "no freedom and democracy in Serbia" and that the country is heading towards a one-party system.

Obradovic and Radulovic later, along with the Director of the Republic Statistical Office Miladin Kovacevic, discussed "the technique of statistical processing of data in the function of the RIK."

Earlier, opposition party leaders met at the headquarters of the Democratic Party because of suspected electoral fraud, and arrived at the RIK a little after midnight.

The leaders of the DS, the SDS-LDP-LSV, the DSS-Dveri and the Enough is Enough (DJB) movement said their results were different than the data presented by the SNS, and that they wished to inspect all election materials.

According to the opposition data, a total of seven electoral list had won seats in Serbia's new parliament - the SNS, the SPS, the SRS, the DS, SDS-LDP-LSV, DSS-Dveri, and the DJB. They accused the state commission of stalling the publication of this data.

On Monday morning, the RIK announced its current results that showed the SNS and six other lists had crossed the five-percent threshold.

Speaking last night, the leaders of the four lists said that regardless of ideological differences, they intend to fight for the right to democratic elections and would not allow "overnight redrawing of the will of the people, and manipulations and engineering projecting what the SNS and Aleksandar Vucic want."

The opposition leaders also stated that RIK officials promised they would be given access to all the electoral materials, including "bags, records and (ballot) papers."