A new Antenna Group Serbia/CeSID poll has shown that more than 50 percent of respondents intend to vote, and that the campaign has not affected their choice. 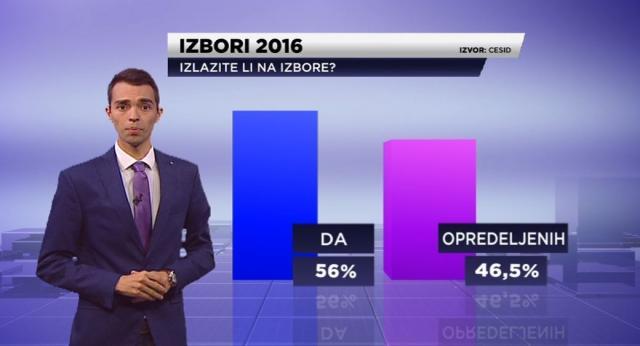 As many as 76.8 percent said the election campaign had not changed their decision on who to support with their vote, while only six percent said it did.

Of 1,009 respondents, 56 percent said they would turn out at the polling stations on April 24 - 46.5 percent of whom already know who they will vote for.

This group was asked to name their choice, and their answers, given last week, have been compared with another poll, conducted in the last week of March.

According to this, the SNS will receive a little over 50 percent of the votes of decided voters, and this figure remained almost unchanged.

The SPS lost two percent compared to late March, while the Radicals (SRS) maintained their numbers and will, according to this poll and when it comes to decided voters, receive seven percent.

Others above the five-percent threshold include Sasa Radulovic's Enough in Enough Movement, the LDP-SDS-LSV coalition, and the DS-led coalition, which is close to the edge of the threshold.

The DSS-Dveri coalition is now on the edge of the threshold - after polling at eight percent in the last week of March.

Asked whom they see as Serbia's next prime minister, 42.2 percent said Aleksandar Vucic, while 18 percent had no suggestion.

"Someone new, young" was the answer given by 8.1 percent of respondents, while Ivica Dacic garnered 6.3 percent.