SNS party leader Aleksandar Vucic has said that he "never believed in the loyalty of the leader of the Socialist Party of Serbia, Ivica Dacic." 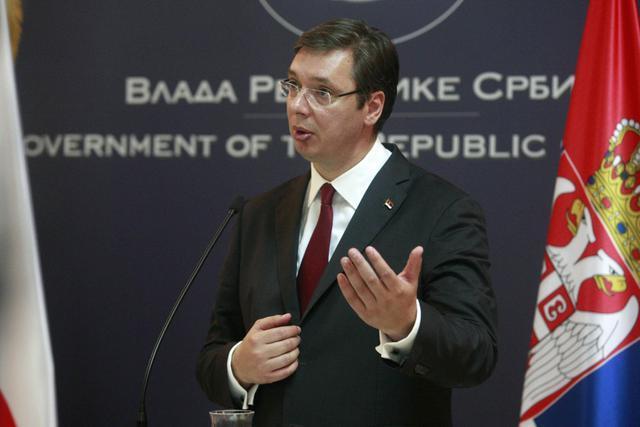 Vucic, who currently serves as prime minister with Dacic serving as his first deputy and foreign minister, added that the Socialists have been in his government "because he felt that was good for the future of Serbia."

"I never believed in Dacic's loyalty, I do not believe in it today. I worked with him not because of his loyalty, but because of the future of Serbia," Vucic told Belgrade-based broadcaster TV Pink.

He pointed out that he "never spoke a bad word about the people from the SPS" while listening to the insults coming "from (SPS officials) Branko Ruzic, (Milutin) Mrkonjic."

"Imagine the people you give a chance to, let them be in the government because of the interest of Serbia, and they repay you by shouting 'Vucic' you faggot'," he said, in an apparent reference to a group of trumpet players dressed in SPS shirts that were recently chanting this.

Vucic "reiterated that he believes the opposition would unite in a single day" and that he "truly believes Dacic, Seselj, Tadic, Jovanovic, could sit in the same government together."

"Nobody can frighten me with the loss of power, that's the difference between me and the others," said Vucic.

According to him, if his Progressives "win the trust of citizens" in the April 24 elections, they will "bear the responsibility with their coalition partners - but they want as broad a front as possible for Serbia's progress."

"Whether or not we can go with someone, and with whom, we'll see after the elections," said the leader of the SNS.

Vucic also spoke about former Serbian and Yugoslav president Slobodan Milosevic to say he made "two unforgivable mistakes" which concerned leading the country into military conflict, and politically motivated murders.

"The people must not be exposed to that, one must not enter into a conflict without a goal and a strategy and go out defeated. Secondly, I cannot blame him directly, nor interfere in the decisions of the court, but I think it's always bad when you have murders with a political background," said Vucic.

He added that Milosevic was a serious statesman and that his intentions - to preserve the Serbian people - were better than the result, which was bad.

When the interviewer suggested that he was "blaming Milosevic for losing wars, not for starting them," Vucic replied:

"I do not think he was the only culprit for the started wars. In any case, it was wrong to go to war, he had to have been smarter, because he was leading the country."

"Today I'm leading the Serbian government and I know I must not do something like that...I do not want Serbia to be a leper of Europe, because in the end, ones is accountable to the people," he said, adding that "history will be the judge of everything" while he was unwilling to "hang Milosevic again" - but would also "not take part in praising (him)."

The journalists then observed that Milosevic also "committed a kind of economic crime," which Vucic did not dispute, but said that "even if by force, he retained the substance of our companies."