Tomislav Nikolic was on the Greek island of Vido on Monday, where he spoke on the 100th anniversary of the landing there of the evacuated Serbian troops. 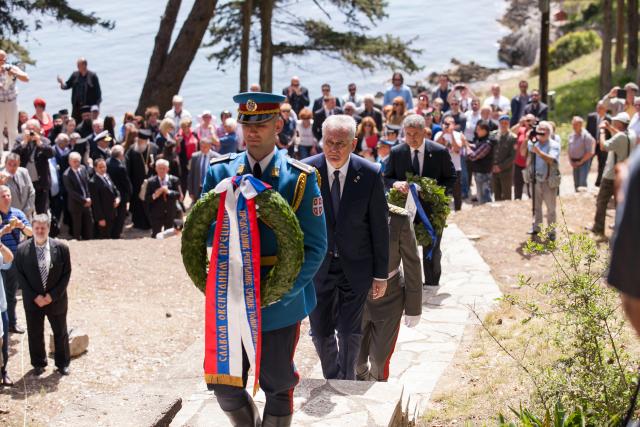 The Kingdom of Serbia soldiers and a part of the population started retreating toward the Mediterranean via Albania after the triple German-Austrian-Bulgarian WW1 invasion of the country in the winter of 1915-16.

The ordeal, known in Serbia as "the Albanian Golgotha," cost a great number lives. Thousands of survivors died of disease and exhaustion after reaching Greece, while those who recovered were later sent to the Macedonian (Thessaloniki) Front.

Speaking on Monday, Nikolic said that "one of the greatest dramas" in the history of the Serbian nation took place a century ago on Vido and nearby Corfu. He said "the brotherhood of the Greek and Serbian nations was forged for eternity, forever embedded in our being, as a part of the suffering and heroic history of Serbia."

Serbia, he continued, will never forget those who fought and died alongside its soldiers on the Macedonian Front, and mentioned troops from France, Russia, England, Ireland, Scotland, Greece, "the army of Essad Pasha," and those from Canada and Italy. The Serbian president said that around 21,000 Serbian soldiers died on the front, as well as 23,000 French, 3,000 British, 1,500 Greeks, and 3,500 Italians.

Moreover, he added, on the personal orders of Tsar Nicholas II 10,000 Russian soldiers joined the allies there, "the best members of the Moscow Military District."

"Although everyone wanted them, they chose to fight as part the Serbian Army. About 4,300 Russian soldiers died. All of them Serbia will never forget," said the president, adding:

"We believe that the Macedonian Front could not have saved the Serbian Army in 1915 - although triumphal arches decorated with flowers were waiting for the allies in Nis (southern Serbia," along with the hopes of the people that European armies would arrive."

"We believe they would have helped us if they were able to, and would have prevented Austrians, Hungarians, Germans, and Bulgarians from overrunning Serbia," said Nikolic.

"We had faith in ourselves and made the allies allow us to break through the Macedonian Front in 1918, which broke the backbone of the Axis, and ended by that time the greatest war in the history of human civilization," said the president.

Addressing the delegates of the WW1 Allies, the mayor of Corfu, officers and cadets of the Greek and Serbian armies, as well as descendants of Serbian soldiers, the president invited them to try and imagine the island as it was 100 years ago, "as one of the greatest dramas" in the history of the Serbian people played out there, ending in the deaths of 7,747 Serbian recruits.

"The souls of these heroes and martyrs of ours went to Serbia together with the freedom they conquered for us, for our children, for the children of their children. Less than a kilometer away, on the island of Corfu, the entire Serbian state, the Kingdom of Serbia, settled in 1916 - the National Assembly, the (Church) Metropolitanate, municipal administrations, schools, the Tax Administration, the Printing Office... and the tired and exhausted old King Petar Karadjordjevic, who went from Belgrade to Corfu with his army," said Nikolic.

The president today thanked the people of Corfu, the descendants of those who helped the Serbians 100 years ago, saying they were selfless hosts to our ancestors, and praised the friendship between the two nations.

Allied ships started transporting the Serbians who had reached Albania in January 1916, and by February 15, 135,000 people reached Corfu and about 10,000 Bizerte in Tunisia.

The most seriously sick and wounded were taken to the island of Vido. About 5,400 of those who died there were buried at sea - an area that is referred in Serbia as "the Blue Tomb." A memorial complex with a mausoleum has since been built at the site.

Tomislav Nikolic is due to be declared an honorary citizen of the municipality of Corfu later on Monday. The municipality was given Serbia's Sretenje Order of the First Degree on the occasion of Serbia's Statehood Day in February.

Speaking during the ceremony today Corfu Mayor Konstantinos Nikolouzos said it was organized to honor those who lost their lives during the stay of the Serbian Army on this island from 1916 until 1918, but also to send out a strong message of solidarity and humanity to the whole world.

Speaking about Greece, he said the country was going through a difficult period:

"We are faced with a big economic crisis and serious economic and political consequences for European and global societies. We are fighting for our dignity and independence, faced with an implacable stance of the leaders, who are trying to stifle the rights of peoples and any voice of resistance."

"We are fighting to get back on our feet, and in the end we will win - but your presence gives us strength, because you too have competed with history and came out victorious," the mayor said, addressing the Serbian guests at the ceremony, and noting that he hoped Corfu and its residents would never again have to prove their friendship for Serbia under similar circumstance as a century ago.

According to him, relations between Serbia and Greece have remained strong and grow stronger over time.

"In difficult times, when the Serbian people were facing challenges, Corfu's residents stood with them in every possible way," Nikolouzos said, recalling the 1990s wars in the former Yugoslavia, and saying the Serbian nation "paid with great bloodshed for the disintegration of Yugoslavia and the open American intervention, and tried to start its life again from the ruins of NATO's (1999) bombing."

At that time Corfu's residents, he continued, "not only gladly offered humanitarian help, but also reacted, strongly as did other Greeks, by sending protests and organizing mass demonstrations, expressing their opposition to an unjust war and their solidarity with the Serbian people by singing 'Tamo Daleko'," the mayor said, referencing the iconic Serbian WW1-era song.

He added that the current refugee crisis represents a serious problem for Europe, but that "we need to look back to our history and learn from that example" and that protecting and guaranteeing the rights of refugees "is obviously our duty, proceeding from humanity's inalienable values."

"From this place, that historically marks humanism and cooperation between nations, we are sending a steadfast message to the whole world that solidarity between nations will make the world a better place, and conquer any form of death."