As many as 71.6 percent of respondents in a new B92/CeSID poll think that Serbia's membership in the EU and in NATO would not be good. 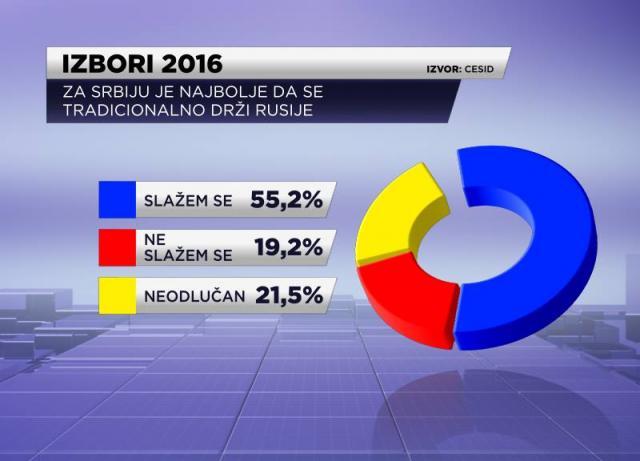 At the same time, more than 55 percent think Serbia should "traditionally stick with Russia" - and the number of those who support this policy is constantly growing. A little over 19 percent disagreed, while 21.5 percent are undecided.

Only 11.2 percent agreed with the assertion that "it is best for Serbia to join the EU and NATO." 14 percent of respondents were undecided on this issue.

Opinion polls have shown increased euro-skepticism in Serbia over the past years - however, this trend in usual in all candidate countries.

Asked about "the priority topic" in the ongoing campaign is, 38.5 percent said it was the standard of living and high unemployment, 18.2 named "economic topics," while 11.1 percent chose rights of workers and pensioners.

Nine percent said it was investment in agriculture, while 7.4 percent opted for the fight against corruption and crime.

Friday's poll is one in a series produced by B92 and CeSID during the election campaign. The results are presented by Filip Cukanovic on B92 TV at 16:00 and 20:00 CET on Mondays, Wednesday, and Fridays.