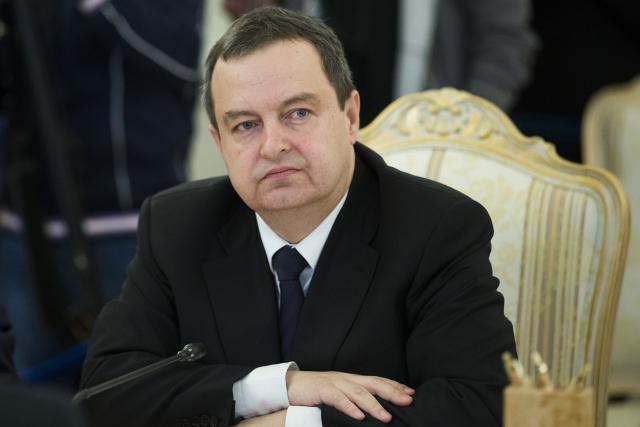 Dacic is seen in Moscow on Friday (Tanjug/AP)

Dacic made the comment during his joint news conference in Moscow on Friday with Russian counterpart Sergei Lavrov, who took the opportunity to call on the EU "not to tell terrible tales" about the Russian-Serbian Humanitarian Center (RSHC), located in the town of Nis, southern Serbia.

Lavrov also stressed that EU representatives in the past "refused to visit it."

Dacic said that the center's activities are exclusively humanitarian in nature and have nothing to do with espionage, Tanjug agency is reporting, quoting TASS.

"The Russian-Serbian Humanitarian Center is not filled with spies, they'd have nothing to do in Nis. Spies are sent to enemy territory, whereas Serbians love Russia even more than some Russians," Dacic remarked.

Lavrov stressed that the United States and the EU were offered - "as a response to speculation" - to visit the center over the past several years since its establishment, but that they refused, "as expected - aware that their suppositions are false."

"I would not like our partners in the EU to continue to tell terrible tales about the center in Nis, that it is full of Russian spies, and the cause of artificial problems in relations between us, Serbians, and the EU," said Lavrov.

He stressed that experts from the RSHC could soon join humanitarian operations in helping the residents of Palmyra, Syria.

"That also includes deliveries of humanitarian goods and participation of the center's experts in mine clearing," Lavrov stressed.