“I am sorry to hear Bakir Izetbegovic fabricate that anyone from Belgrade is threatening Bosnia-Herzegovina," Aleksandar Vucic said late on Tuesday. 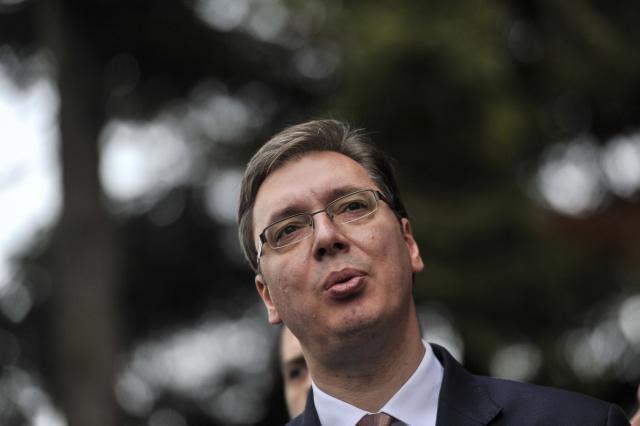 In a statement, he added: "As the Serbian prime minister, I have not done that before, during or after any election campaign."

"The truth is only one and unequivocal. It took Bakir Izetbegovic less than two days after the conviction of Radovan Karadzic to launch the initiative, not for complete reconciliation, but rather for a legal and political revenge against Serbs," said Vucic.

"With this, Bakir Izetbegovic threatened Serbia, and we will not tolerate his threats, because I do not know what an alternative would be. I suppose Bakir Izetbegovic has accidentally omitted that this was primarily about political violence, which his announcement of a revision of the genocide claim certainly was."

"As regards violence, I am proud to say that all kinds of crimes and acts of violence are punished in Serbia,” Vucic said.

"It would be good if Bakir Izetbegovic showed more willingness to shed light on the crimes committed against Serbs in Bosnia-Herzegovina and bring the killers and criminals to justice. At least those for whom there are living witnesses that they gouged people's eyes out just because they were Serbs," said the prime minister, and added:

"I am certain that would be a good start of conducting justice and law and an important contribution to the policy of peace in the Balkans. Serbia is fully committed to peace and reconciliation and no complaints or lawsuits, politicization of individual cases will be used to look for the culprit for the conflicts either in the Bosniak, or in any other people from the area of the former Yugoslavia."

Vucic's reaction came after Izetbegovic, who is the Bosniak (Muslim) member of the Presidency of Bosnia-Herzegovina, commented on the Serbian prime minister's statement made late on Monday to say it was "hasty and probably serving the election campaign in Serbia."

Namely, Vucic said that Izetbegovic was looking for an excuse to launch a new spiral of violence. This comment came after Izetbegovic earlier on Monday announced that legal experts were analyzing the Karadzic verdict to find out if it could offer new elements to launch a revision of the charges against Serbia for aggression and genocide.

On Tuesday, Izebegovic said that Bosnia-Herzegovina "did not start or commit aggression in the past and does not intend to do it in the future, but would not give up on truth and justice and will use all legal mechanisms at its disposal to in the end arrive there."

He added that Bosnia-Herzegovina will always be a partner for peace to everyone in the region, "including the legal authorities of the Republic of Serbia" and wishes to build relations "based on equality and mutual respect."

"We don't want any conflict, neither with Serbs nor with Serbia. We want to build future relations based on truth, justice, and facts, on equality and mutual respect. And we will not tolerate, only a few days after the verdict to Radovan Karadzic definitively determined the terrible crimes committed in Bosnia-Herzegovina, above all against Bosniaks, to be threatened from Belgrade that we will be to blame for a new 'spiral of violence' if we seek justice before international courts," said Izetbegovic.