Aleksandar Vucic said on Thursday that his country "must not, cannot, and will not" allow anyone to use the Karadzic trial verdict to attack the RS. 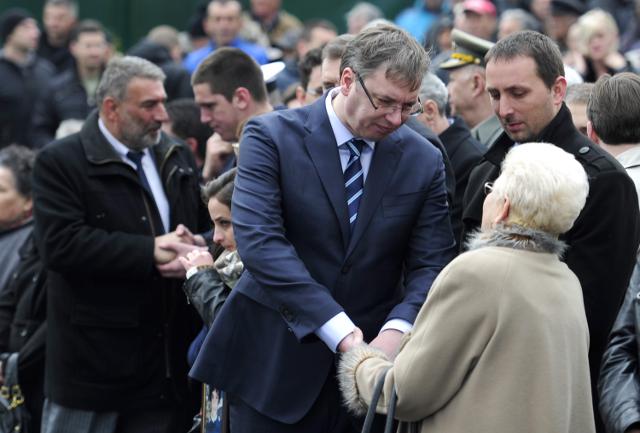 Vucic is seen in Varvarin on Thursday (Tanjug)

The Serbian prime minister made the statement as he was addressing a memorial for NATO's victims in Varvarin earlier on Friday.

Former President of the Serb Republic (RS) Radovan Karadzic was found guilty on genocide and war crimes charges later on Thursday, and sentenced to 40 years in prison in the first-instance verdict announced by the Hague Tribunal.

"Serbia has an obligation to take care also of its people outside the borders of Serbia. I am warning those who think of using today's verdict against the former RS president to mount a political or any other kind of attack on the Serb Republic, that in line with the Dayton Agreement, Serbia must not, cannot, and will not allow it," Vucic said in Varvarin.

As he stressed, Serbia will stand with its people and protects its right to survive, as well as the right of the RS - the Serb entity in Bosnia-Herzegovina - to exist and live.

"We are not endangering anyone, we will not threaten anyone, but we will not let anyone trample on Serbs because they are Serbs," he said, adding that Serbs are a proud, unsubmissive, and unconquered people.

The prime minister stressed that despite what happened in the past, Serbia will do all it can for the sake of reconciliation and cooperation with neighbors in the region.

It was reported that Vucic said the Varvarin speech would be his only address of the day.

B92 learned earlier in the day that Vucic will schedule an extraordinary meeting of his cabinet for Friday.

The only item on the agenda will be the Hague Tribunal's verdict in the trial of Radovan Karadzic.

Before his cabinet meets, Vucic will confer with SPC Patriarch Irinej.

The government will discuss the verdict, "and the legal and political repercussions of the Hague decision."

It is expected that the public will be addressed after the meeting.