Serbia has made progress since the time of the conflicts in the former Yugoslavia, especially in recent years under the leadership of Aleksandar Vucic. 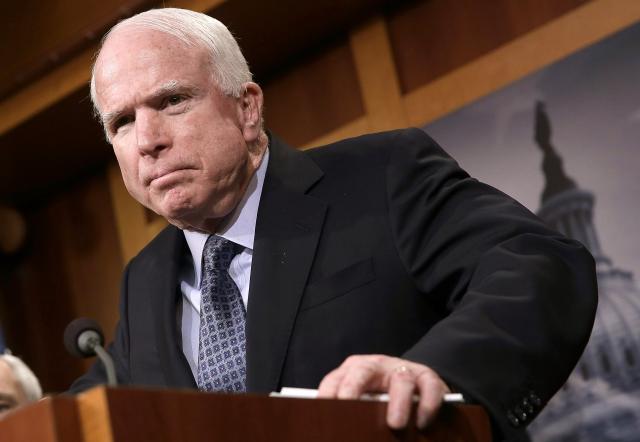 That is what U.S. Senator John McCain, who was recently in Serbia, told Voice of America's Serbian service in an interview, noting that his country can provide assistance to Belgrade when it comes to economic development and EU integration.

"My impressions are that Serbia has made great progress, my impressions are that they have a strong leader in Prime Minister Vucic, that they are experiencing enormous strains because of the influx of refugees. I think they're handling it well, but it's something that obviously can't continue. Efforts are being made to have more peaceful relations with their neighbors in the Balkans - so overall, I think they've come a long way in the last 10 to 15 years, particularly under the prime minister," he said.

Asked about relations between the U.S. and Serbia, McCain said they had improved significantly, and added:

"I think that Serbia probably needs more assistance in light of the refugee crisis that they're facing. They need more integration into the European community. But overall when you look at the entire Balkans area, you might argue that since the days of the conflict Serbia in particular in recent years has made more progress."

Asked what kind of assistance Serbia can expect from the U.S. to deal with the migrant issue, the U.S. senator said:

"I hope that Serbia could receive assistance as far as the refugee situation is concerned, but overall, I would hope that we could provide economic development aid. After all, Serbia fought a very... hotly contested conflict, and I hope that we could help in every way, with the Europeans, to facilitate European integration in the EU."

Asked "how viable" Serbia's position of military neutrality is, and its "balancing between the West and Russia and developing agreements with both NATO and Moscow", McCain replied:

"I think Prime Minister Vucic has been very strong and standing up to Russian pressure. Russian pressure is very different from American pressure. We don't want anything from Serbia. We would just want to see it become a more viable democracy, and Russia wants to have a dominating influence, and that makes it very, very difficult. So, all I can say is I applaud Prime Minister Vucic's standing up to Vladimir Putin but I also understand the pressures are very significant, so he has to be very careful."

Asked whether Serbia "can stay neutral," the U.S. senator replied that he believes this will have "a lot to do with the actions of Vladimir Putin," and added:

The interviewer noted that there was "a large" anti-NATO sentiment in Serbia, mainly due to "the air campaign in 1999," i.e., NATO's bombing of Serbia - and asked "what's needed for the wounds to heal and people to have less of an anti-NATO sentiment."

"I think Americans overall are well thought of in Serbia," said McCain, and added:

"There still is a certain amount of... resentment over the conflict - although I think you could argue that Serbia is better off today than they were then by far. But I think what needs to be done is that the Serbian people need to know that we are assisting them, and so we have to assist them. These are very difficult times. The country is being - if they allowed it - would be literally overrun by refugees, and the Serbian people don't want that, and their economy is such that they need help."

Speaking about the migrant crisis, he said this was more of a European issue and that his country could help in humanitarian and other aspects.

"If the United States had gotten rid of Bashar Assad and kept Iraq under control, we would not be experiencing the refugee crisis that we are today. So therefore it seems to me the United States has an obligation to help out as much as it can, with the results of our failures," McCain said.