PM: We need NATO as ally to protect people in Kosovo

Aleksandar Vucic has said that Serbia "remains militarily neutral, but needs NATO as an ally to protect the Serb people in Kosovo and Metohija." 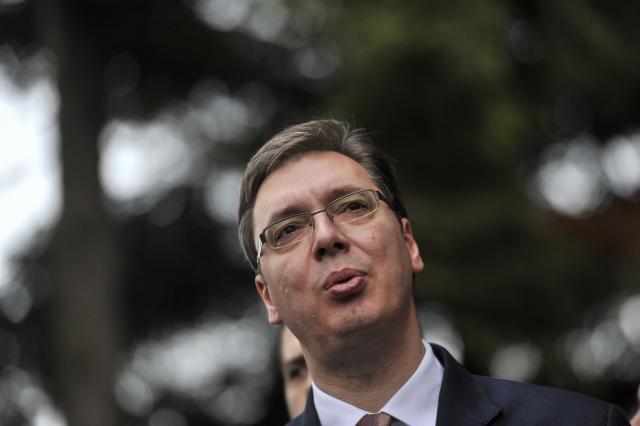 Vucic reacted to the criticism in the media - originating from a part of "the right-wing" opposition over an agreement with NATO granting its members freedom of movement and immunity - by saying it amounted to "political hypocrisy of those who thump their chest as the protectors of Kosovo and Serbs in Kosovo but were unable to even protect mosques."

The prime minister said the agreement in question was "signed during another government and was then ratified, but has only now become a topic for political, and not for supposedly patriotic reasons."

"Now this agreement is a topic, not when it was signed, because the topic and the target should be me, and not those who signed it," Vucic said, responding to reporters' questions.

He noted that he does not think the agreement is bad, and added:

"There are people taking care of our national interests, but they do not conduct them by hitting their heads against the wall," Vucic said, explaining that "in that way nobody, the wall included, will be done any favors - it will only be made ugly."

"Let not those who passed all the worst and most disastrous decisions for this country lecture, those who would return this country to isolation tomorrow, and those who would tomorrow lead Serbia into some new conflicts...Just let them not lecture me because they have to learn something, do it, and then teach and preach," he said, adding:

"Sanda (Raskovic Ivic) was protecting Kosovo in 2008, but did not even protect mosques in Belgrade."

Vucic stressed that he will "not lead Serbia into conflicts and wars with anyone, and will always protect it from everyone."

"I will protect also its national interests. I will protect the Serbs when there is a resolution in the UN, even though a good part of my government is against it - because they do not know how they'll be having coffee with some ambassador - although I have other problems, I will step up and stand and say, 'this can't be done'."

He also said the same was true "when it comes to UNESCO" but also "when Croatians are implementing unilateral sanctions against us."

"Then also I will - though there are some members of the government who tell me, 'let's not respond in kind' - I'll say, 'We will respond in kind and stronger, until you withdraw your measure,' and I have no problem. But to show force and muscles, about us winning and killing NATO...We need NATO as an ally to protect the people in Kosovo for us," Vucic has been quoted as saying.

He then explained that Serbia bears all the costs of joint actions with NATO, and reiterated that the agreement in question was signed by someone else, and that he does not think it represents "something bad" for Serbia. He added that Serbia is "a sovereign country that always and at any moment can make any decision."

Vucic also said that his government's "smart and wise policy protects the people in Kosovo and Metohija - and that is the key thing." The prime minister then added that he "has no time to deal with partisan policy and respond."

"I think the people see and recognize everything well," he concluded.