McCain: It's up to Serbians to decide on NATO membership

Prime Minister Aleksandar Vucic on Friday welcomed and met with U.S. Senator John McCain, who led a delegation of the U.S. Congress. 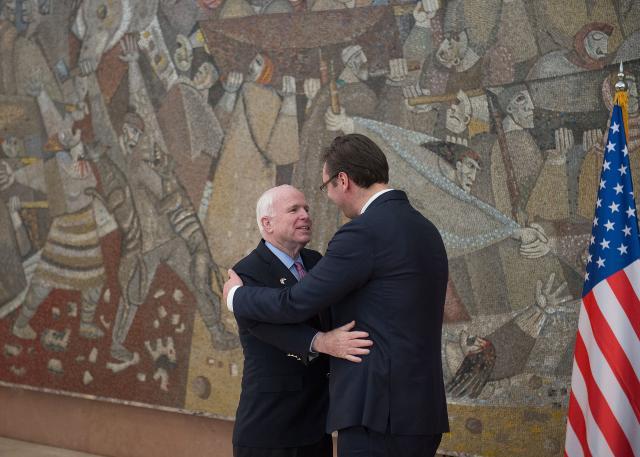 Vucic said after the talks said that he and the senators discussed global issues, including the migrant crisis, and that he told them "Serbia will not raise walls in the future, either, because that is neither a European, nor a civilized solution."

Vucic said he was convinced today there are "very few or almost none at all" obstacles to creating a better environment and even better relations between Serbia and the United States.

Vucic said that he urged American officials to help Serbia in the preservation of peace and stability which are crucial for economic development.

According to him, anyone who thinks that Serbia can remain on the European path and make economic progress without America's support was "not serious and irresponsible" and described the EU bid as a strategic goal of the country.

"I could be showing muscles and utter a bad word because of 1999, but I wonder what would be the result, will more investors come, will more people get jobs...," Vucic said, responding to questions from reporters, in an apparent reference to NATO's 1999 air strikes against Serbia.

He pointed out that "Serbia wants good relations with the U.S." and is "not ashamed of such a responsible policy, but proud of it."

Asked to what extent "the alliance of Serbia and the United States in two world wars may help cooperation" Vucic said that Serbia "remembers the friendship from these wars - which was then lost in 1999."

"It is time to invest a lot of effort and energy in order to restore that trust, and I am grateful that senators do, and we will do that too," said Vucic.

He added that Serbia's goal is to have good relations with all major powers, and that he would "at the same time always protect the interests of our country."

John McCain addressed reporters during a joint press conference to say his country "recognized Serbia's efforts to normalize relations with Kosovo, the progress made in relations with Bosnia-Herzegovina, economic progress, as well as the commitment of Serbia to join the EU."

Serbia's military neutrality and possible NATO membership is a matter that Serbia and the Serbian people will decide on, he noted.

"NATO membership is a decision that is up to Serbia and its citizens, Serbia's priority is EU accession, " McCain said.

Asked "how he sees Serbia's military neutrality, its stepped-up military technical cooperation with Russia and potential NATO membership," McCain said that he is afraid that the Middle Eastern crisis will involve various peoples in one way or another and that, over time, Serbia will have an increasing role in humanitarian operations.

Anything more than that is something that Serbia and the Serbian people will decide on, he said.

Asked if the U.S. foreign policy will change "also toward Serbia and the region" after the presidential election in that country, he responded affirmatively.

Earlier in the day, McCain toured migrant reception centers in Adasevci and Sid, and told reporters there he would ask that the United States gives additional assistance to Serbia in coping with the refugee crisis.

"Serbia needs additional aid in the migrant crisis. Upon my return to the States, I would ask my colleagues to make this possible," he said, adding that the migrant crisis "requires a lot of money" and thanked the Serbian government "for doing an amazing job in very difficult circumstances."

Serbian ministers of labor and internal affairs Aleksandar Vulin and Nebojsa Stefanovic showed McCain the accommodation provided to migrants and the registration process in Adasevci, where there were around 1,000 migrants at the time.