Ambassadors in Belgrade and Ankara summoned to MFAs

As Moscow and Ankara are exchanging harsh words, Turkey and Serbia also have a problem. 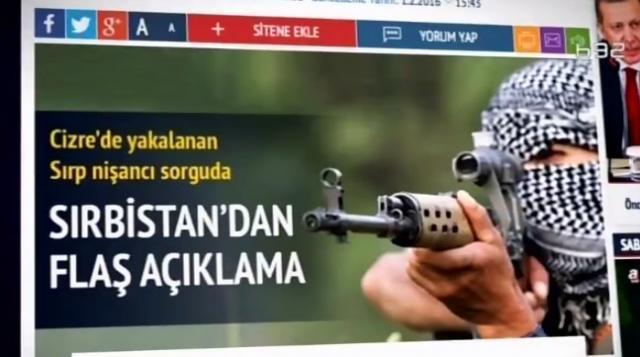 The two countries have sought to solve it by summoning ambassadors posted in Belgrade and Ankara to the respective foreign ministries.

Recent reports in the Turkish press about alleged Serbian snipers and spies working for the Kurds have managed to easily stir relations between the two countries that are otherwise described by both sides as "better than ever."

Turkish daily Sabah thus writes about "Serbian snipers hired by Kurdish forces to liquidate Turkish generals," but also about "several of them (snipers) being liquidated."

That is why Serbian ambassador in Ankara and Turkish ambassador in Belgrade have been called to the Turkish and Serbian ministries of foreign affairs. The top Turkish diplomat in Serbia said, a day after his meeting with officials of the host country, that "there is cooperation."

"Turkey and Serbia are serious countries, they are closely monitoring this issue and cooperating. Our police minister made a statement saying they arrested some foreign nationals, but that it is only speculation these were Serbs. Institutions of the two countries exchanged information on these speculations that are not concrete information," said Ambassador Mehmet Kemal Bozay.

Serbian Deputy Prime Minister Rasim Ljajic denied the veracity of another affair reported by the Turkish press - about "a secret Serbian agent posing as journalist" allegedly arrested in the areas where the Kuridstan Workers' Party is active.

"As for the spy, that was quickly refuted because the story is pure science fiction. It's about some recording made two years ago, during the arrest of a Turkish citizen and has nothing to do with us. Certainly some circles both in Serbia and Turkey do not like the good relations between the two countries because this is a period of the best possible relations between Ankara and Belgrade," said Ljajic.

Experts say that sudden ups and downs in relations between countries are "quite common."

"On the one hand the economy is showing is some positive signs, mutual meetings speak about a high level of political dialogue, but on the other we have to be aware of a kind of prejudice that comes from the historical context, but also the frequent emotional statements of some Turkish officials," says Aleksandra Joksimovic, from the Center for Foreign Policy NGO.

These relations came to a boiling point in October 2013 when then Turkish Prime Minister Recep Tayyip Erdogan visited Kosovo, to say that "Kosovo is Turkey, and Turkey Kosovo." Ankara later said the statement was "taken out of context."