Russia to provide "direct support to ally in Balkans"

Russia will consider the technical details of Serbia's request to procure arms and the S-300 air defense systems, Dmitry Rogozin has said. 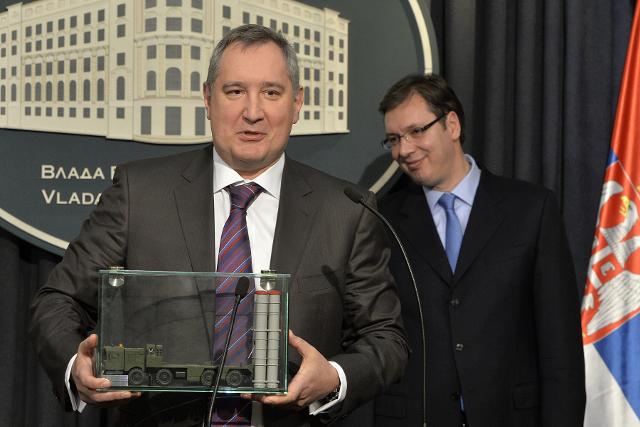 Rogozin holds a model of the S-300 missile system (Tanjug)

"We will provide direct support to the ally in the Balkans. We will consider your request in the shortest amount of time," the Russian deputy prime minister said during a joint news conference in Belgrade with Serbia's Prime Minister Aleksandar Vucic.

Asked "if Russia will help Serbia with the acquisition of the S-300s" - which Vucic said were "too expensive for our country" - neither official wished to reveal any details of the ongoing talks, which, according to the Serbian prime minister, are set to continue "for many more months."

Rogozin said Russia was not interfering in Serbia's security issues, noting that the country "has the right to acquire highly efficient non-offensive armaments."

"The appraisal of Serbia's security situation is its own business, we are merely considering the technical details," he added.

Speaking about "whether Serbia can have problems on its EU path because of cooperation with Russia, on which the EU has imposed sanctions," Rogozin said that EU countries themselves "lift sanctions where it suits them, and implement them where they have no interests at all."

"I don't think there's any risk either for Serbia or Serbia's European choice," he said.

The Russian official believes that participation in NATO provides no additional security, and stressed that had Serbia had S-300s in 1999 - i.e., as NATO carried out airstrikes against the country - there would not have been destroyed buildings in Belgrade and elsewhere in Serbia.

Deputy Prime Minister of the Russian Federation and co-chairman of the Russia-Serbia mixed committee Dmitry Rogozin said on Monday that there was room for increasing cooperation in agriculture between Russia and Serbia.

Rogozin told a press conference after meeting with Serbian Prime Minister Aleksandar Vucic in Belgrade that exports of agricultural products from Serbia to Russia had doubled during 2015 and could grow even more.

Big EU economies are in a difficult situation and Russia is faced with a complicated situation, but we see a “window of cooperation” between Serbia and Russia in agriculture, said Rogozin, adding that the relationship between Russia and Serbia should be turned into real economic success as soon as possible.

Rogozin added that the New Year also opened a "window of cooperation" in the construction industry.