"They realized where things are going, Berlin won't be easy"

The meeting in Berlin was called because Macron and Merkel realized that things were going in the wrong direction, President Aleksandar Vucic said last night. 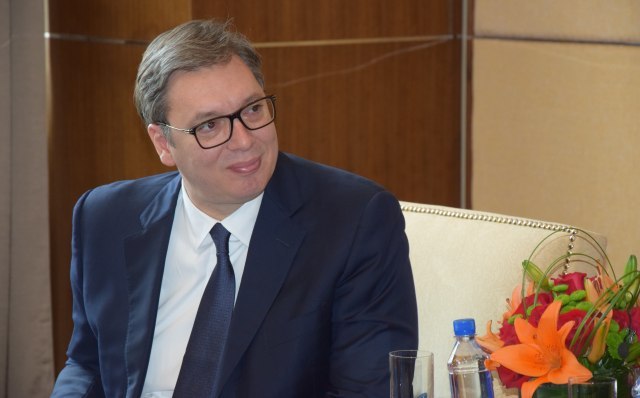 In spite of the fact that, as Vucic explained earlier, only pressure is expected from that meeting, he also considers it very important that this meeting ensures preservation of stability.

"The essence is to make something that will at least guarantee preservation of stability, and that would be a big move. If a deal can be that there is no surprises no raids.... I will be very happy," he told Pink TV.

When asked by what would be done with such an agreement, if the Kosovo Albanians failed to respect it, like they've done the Brussels agreement, Vucic said he "saw no alternative":

"What else do we do? Not participate in talks, agreements? Do you think it will be pleasant, because I'm sure there will be 150 Kosovo flags there - should I walk out at that moment," he asked.

Vucic pointed out that at today's meeting in Berlin, the Serbian delegation will not find it be easy, as they have already pointed out in advance, to some"strange moments" - the format of the meeting and the selection of the participants.

"I have nothing against Sarec, on the contrary, but why, Sarec, and not Dancil, why Plenkovic, not Orban, why not Borisov," Vucic said.

He also noted that, for example, Milorad Dodik was not been nvited, who presides over the Bosnian Presidency and has received the highest number of votes of in the previous elections, while Denis Zvizdic. a member of the presidency who represents Croats, has been invited.

"Everyone will say that Kosovo is independent, that's why they have been invited to say that it was irresponsible to talk about what Serbia could gain," the president said.

"That's why I talked about demarcation, so that we could get something ... Now I know we will not fight for that idea," Vucic said.

However, the Serbian delegation will be, he said, the only one who will speak against the independence of Kosovo.

"Of course, it will be difficult, but it is not our first time," he said, adding, "But, as I tell you, we have chosen it, we fight for the country. It's ours to fight for."

Vucic expects tomorrow in Berlin to talk about the European future, the EU countries, on enlargement ... and hopes, he says, for positive signals.

Asked about the outcome that he expected, Vucic said:

"I do not see any outcome in this moment and, frankly, it is sad and doesn't make me happy, because at the same time it will deprive us of one to two percent of GDP in the coming years," Vucic said.

As he said, it is good that a conversation is opened in Berlin, because, according to estimates, everyone will come with demands, unlike us.

Vucic pointed out that Albanians will come to seek visa liberalization, but he thinks they won't get it.

"I think that Albania and North Macedonia will have a new delay in starting EU negotiations. BiH has already been removed from the Council of Europe ...", said Vucic

"We will go without demands. Our demand is only to preserve peace and stability, we do not have bigger demands, for the rest we are capable of ourselves," the Serbian president stressed.

As he said, if they want us in Europe - he is grateful to them for it because we want to belong to this type of society and to implement the reforms, and if they do not want us - thank them again.

"When they first ask the Slovenians, then Zaev, then the Croats, Djukanovic, Zvizdic, and they all explain to us that the borders should not be changed, 'long life to independent Kosovo with these borders ", I say - no problem. The Serbs also don't want borders to change, we just do not understand what those are,"Vucic said.