Vucic says "someone else" may have to form new government

PM-designate and head of Serbia's caretaker government Aleksandar Vucic has said he will "try to form a government in the first half of August." 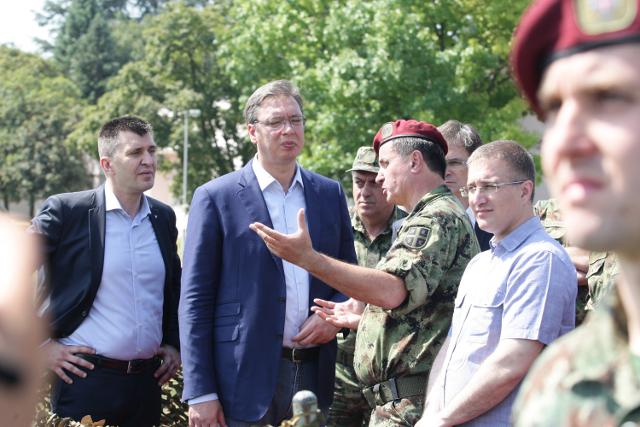 Vucic is seen in Pancevo (Tanjug)

Speaking on Saturday, Vucic said he was not ruling out the possibility that Serbia's government could be "formed by somebody else at his proposal."

During early parliamentary elections held on April 24, Vucic's SNS party won 131 seats in Serbia's 250-seat parliament. In order to be elected, a new government must have the support of at least 126 members of the National Assembly.

"I will try to form it (government) quickly, if I don't succeed, I'm not ruling out the possibility that someone else will form it. We have problems, this is not about some kind of whim. There are things I can't talk about. I don't want to form a government that I myself would be against," he said after touring the Rastko Nemanjic army barracks in the town of Pancevo.

Vucic also stated that he wants his cabinet to cause "joy" - "because citizens will get a government that will secure the highest growth."

"If I manage, it will be soon, if not somebody else will form it, but I will nominate them," he added.

Vucic also commented on Croatia's decision to overturn verdict against Alojzije Stepinac, to say it "spoke more about Croatia than Serbs and Serbia."

"Stepinac was one of the key ideologists behind the worst pro-Nazi government in Europe. Serbia will always be opposed to fascist ideologies. The Serbian people will never support fascism, and will know how to protect the country against it," Vucic said.

The prime minister promised to try to keep relations between Serbia and Croatia as good as possible, and to implement everything from a declaration he had signed with Croatian President Kolinda Grabar Kitarovic, Beta agency reported.

"We will carry out everything, and will do everything to respect the Croatian minority and make it feel at home. I want the citizens of Serbia to be proud of what they can offer to other ethnic groups," Vucic said.