12 years since wave of anti-Serb violence in Kosovo

Thursday marks 12 years since the violence in Kosovo and Metohija when 4,012 Serbs were driven out, most of whom are yet to return to their homes. 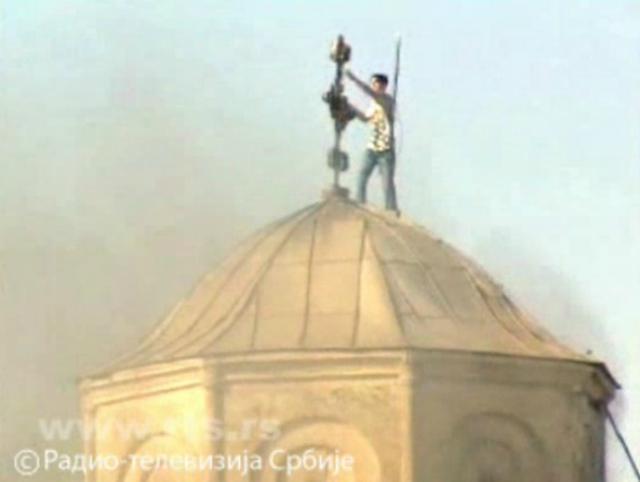 A wave of violence in Kosovo and Metohija resulted in the deaths of 19 people, eight of them Serbs, while 11 ethnic Albanians died as they clashed with international security forces.

At least 170 Serbs and dozens of members of international forces, who clashed with local Albanians in a bid to protect Serbs and their property, were injured.

The attacks, known in Serbian as "the March Pogrom," resulted in the destruction and the burning of about 800 Serb houses and 35 religious buildings, among 18 cultural monuments, including the Church of Mother of God Ljeviska in Prizren.

This temple is one of the most representative monuments of medieval Serbia, and was the episcopal center of the Serbian Orthodox Church (SPC) in the Middle Ages, that gained its monumental form during the time of King Milutin (1282-1321), although it had previously been the seat of the Serbian Church's bishop of Prizren.

The church has been somewhat restored, with the first liturgy after the attacks served six years later, but traces of the devastation and the fires have not been eliminated. This edifice was in 2006 included in the list of monuments under UNESCO's protection.

The church was previously guarded by NATO troops, KFOR, while this job is now entrusted to the Kosovo police.

According to the data of the SPC Diocese of Raska-Prizren from April 2004, the total number of destroyed church buildings neared 100.

International prosecutors and judges in Kosovo and Metohija prosecuted seven cases related to the destruction of churches and sentenced 67 persons to prison terms ranging from 21 months to 16 years.

"The reason or the excuse" for the pogrom, Tanjug is reporting, was a campaign in Albanian language media blaming local Serbs and their dogs of chasing a group of Albanian boys across the Ibar River in the village of Cabar near Zubin Potok, during which one of them drown. However, it transpired this was not true.

A UN mission in Kosovo, UNMIK, police investigation determined that the allegations were false, while UNMIK spokesman Neeraj Singh said at the time that the surviving boys were "under strong pressure from Albanian journalists and politicians to accuse Serbs from a neighboring village."

The March 2004 events in Kosovo were condemned the UN Security Council, as well as the European Union and the Parliamentary Assembly of the Council of Europe, which in April the same year passed a resolution to this effect.

Director of the Serbian Government's Office for Kosovo and Metohija Marko Djuric said on Wednesday that light was yet to be shed on the March 17, 2004 outbreak of violence targeting Serbs, and that the real political causes for the violence had not been removed.

"Not only has the March 17 pogrom not been clarified, the true political reasons for the violence occurring that day have never been removed," Djuric told TV Most in Zvecan, northern Kosovo, Beta agency reported.

Djuric said ethnic hatred and accusing the Serbs of everything that was wrong in Kosovo and Metohija has never been suppressed or eliminated.

"We have never heard except when needed for photographing and shoulder-patting by the international community of any actual willingness on the part of the people with the greatest responsibility in Pristina to do away with accusing the Serbs for everything, always and everywhere," said Djuric, adding he was convinced that "Albanians, like Serbs, are mostly people who want a normal future filled with mutual respect and appreciation."