Vucic: Resolution 1244 is tough for Serbia, I'm afraid there's no solution for Kosovo

Serbian President and SNS leader Aleksandar Vucic said in the show "Focus" that if SPS wants to join the government with SNS, it will, if it doesn't - it won't. 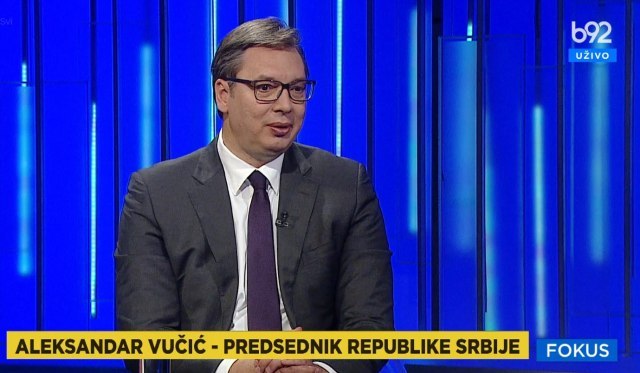 Serbia's President and leader of the ruling Serbian Progressive Party (SNS), Aleksandar Vucic, called on citizens to vote on June 21st, adding that the goal of his party is to get more that 50 percent of the vote.

When asked to comment on Ivica Dacic's performance in the morning program of TV Prva, Vucic states that he does not want to comment on Dacic, with whom he worked for a long time.

"I want to thank Dacic for all the bad words about me. I really don't want to say anything bad," he says.

Vucic said that he would ask Dacic to say who is asking questions, that is, who's demanding from TV Prva journalists to ask questions.

He added that if Dacic wants to join the government with the SNS, he will do that, if he doesn't - he won't, but the question is, he says, who will be able to participate in forming the government.

"We will not 'struggle' to provide majority - we will not do that. Either we will get a clear mandate from the people, or we will not," Vucic said.

He says that the most difficult thing for him in the last 8 years, if the Brussels agreement and the chase against his children are not taken into account, is the visit to Vrginmost in Croatia.

"The man thought it was safe to talk to me if he lowered the blinds," Vucic said.

He says that it was easier in Srebrenica, because he saw something else there.

"I saw how quickly people got scared," he says and explains that when people started throwing stones in his direction, he didn't want to bow his head. According to him, he said the same to the members of Cobra unit, because then they represent Serbia.

When asked whether it's time for SPS to join the opposition, Vucic said that they had run a clear campaign.

"Experts said that Vucic has the best grades, we will engage young people and we will win. I thought that many more lists would enter the parliament, but I am afraid that many will not, people do not want to deal with politics in a professional way," he says.

Some political organizations are losing its rating, because now "people can hear and see" their members before the elections, Vucic believes.

He adds that there will be more parties in the parliament, but with fewer seats.

"There is no one anywhere on the ground," he added.

"I would like to always have the widest possible consensus in society and to have more partners," Vucic said on B92's "Focus" show, when asked if the time had come for Serbia to get a one-party government, without coalition partners, and for the SPS to go into opposition.

Vucic agreed with the remark that part of the international community and foreigners undoubtedly like to have more coalition partners, because in that case they can "pull political players like puppets in the end and do what they want", but he pointed out that the support of citizens is what's most important.

"That is why I have always asked for the support of the people to have an absolute majority, if we don't have it, to rule under blackmail, that is out of the question," Vucic concluded.