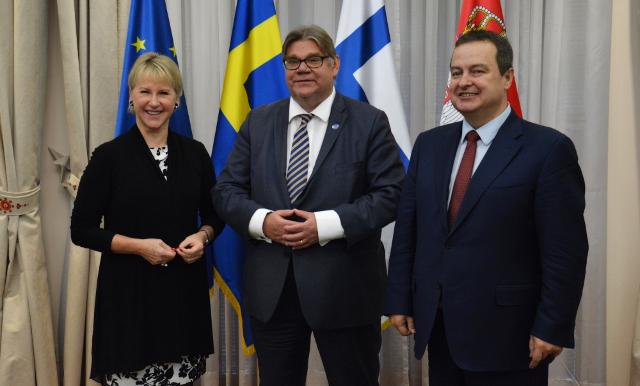 In conversation with Margot Wallstrom and Timo Soini, Dacic thanked the two countries "for their support to Serbia on its path towards the EU and added that these two countries support EU enlargement process," the Serbian government said in a statement.

According to this, Dacic told a joint press conference with Wallstrom and Soini that the topics of the meeting were the situation in the region, improvement of economic cooperation and overall relations.

He "underlined that the Serbian side agreed with the ministers of Sweden and Finland to work on the improvement of relations and added that the President of Serbia, Aleksandar Vucic, informed them about all the specifics of the region and the efforts that Serbia is investing in peace and stability" and "presented to the ministers the priorities of Serbia, including EU membership and regional stability, adding that he would like to see some of the topics that are being put on the agenda, such as the migrant crisis and terrorism."

Dacic reiterated that Serbia will give its contribution through humane treatment of migrants.

"Today in Serbia there are about three to four thousand migrants. We are dealing with that situation, but we cannot withstand the burden of a bigger inflow, to become a parking lot for them if others, let’s say Hungary or Croatia close their borders to migrants," Dacic said.

Noting that Sweden is the leading country in terms of aid to Serbia, he stated that Serbia has received more than EUR 250 million from Sweden for various purposes.

Dacic said that the foreign trade with Sweden is slightly higher than EUR 200 million, and with Finland about EUR 100 million and pointed out that there is room to increase trade.

The Swedish and Finnish foreign ministers said that their countries "strongly support the European perspective of Serbia."

Soini stressed that a joint visit was "an indication that neighbors can cooperate and have good relations, but also of an important diplomatic message of how much they support Serbia."

He also said that Sweden wants to encourage this region, which had a dramatic history, to create stability and cooperation.

This will provide employment for young people and a better future for all, Soini said, and "pointed out that in solving problems dialogue is important, even with those with whom you do not have the best of relations."

But the region now has potential for investments despite all these problems, he said and added that he will send that message to his country.

Wallstrom agreed with her Finnish counterpart, that their common road is an example of how neighboring countries should cooperate.

"Since IKEA has arrived in Serbia, it is possible to see how important the partners are for achieving success," she said and added that neighboring countries should also be seen in that way - as partners, with whom it is easier to be successful.

She added that her country supports Serbia on its path to the EU and "will do everything to help it on that road."

"That will be motivation for young people here. The young should be involved in the talks in the region," she underlined, according to the Serbian government, and added: "Serbia has an important role in the region and Sweden supports and respects that role."

"We will continue to be your friends you can trust," Wallstrom concluded.

Serbia is achieving good economic results and demonstrating the necessary stability, Margot Wallstrom and Timo Soini said earlier in the day, during their meeting in Belgrade with Serbian President Aleksandar Vucic.

"Serbia has good political relations with both Sweden and Finland, which is a good foundation for increasing economic cooperation, in particular for boosting investments from the two countries," Vucic said, according to Tanjug.