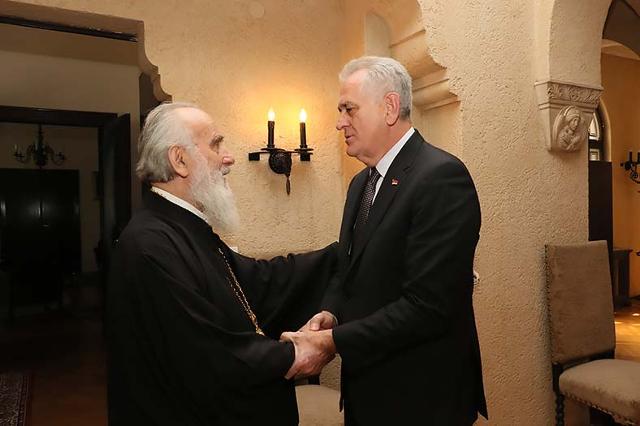 They discussed "current social topics and agreed that coordination was necessary in joint activities aimed at protecting national interests."

"They agreed on the necessity of coordinating joint activities to protect national interests and prevent potential catastrophic historical injustices such as a canonization of Alojzije Stepinac. Such an injustice would impact not only the Serbs, but entire humanity," a statement released by the presidential press office quoted Nikolic and Irinej as saying.

They also discussed the preservation of the cultural heritage in Kosovo and Metohija and activities aimed at further preventing Kosovo's admission to UNESCO.

They agreed on the significance of insistence by the church and the state that the monasteries in Kosovo and Metohija be the responsibility of the Republic of Serbia and that the Serbian cultural heritage must not be allowed to be declared the heritage of so-called Kosovo.

Nikolic invited the patriarch to take an active part in the centenary commemorations of the WWI Battle of Kajmakcalan, the statement said.