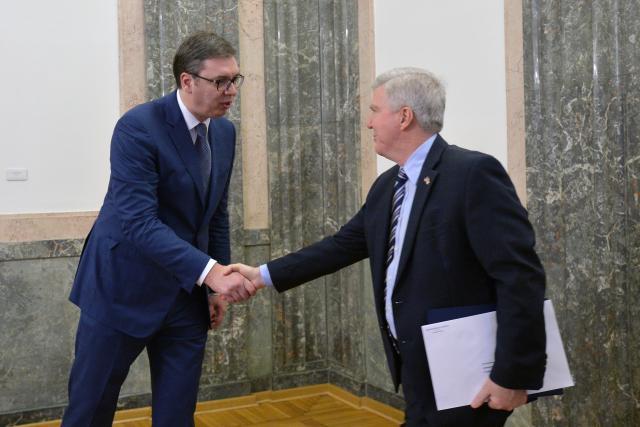 They spoke about "bilateral cooperation, the situation in the region, and the European path of Serbia."

On that occasion, Scott handed Vucic a congratulatory message from US President Donald Trump on the occasion of Serbia's upcoming Statehood Day, February 15.

"Serbia has long been an important partner of the United States. This year marks the 100th anniversary since President Woodrow Wilson raised the flag of Serbia over the White House, which is a good opportunity to recall our longstanding and fruitful bilateral relations," Trump's message is quoted as saying.

The US president's message further stated that it was necessary to continue working together on strengthening regional stability and deepening bilateral relations between Serbia and the United States, the Presidency said.

The topic of Vucic's talks with Scott today was also his upcoming visit to Croatia. The Serbian president "expressed hope that relations in the Western Balkans will develop in the direction of peace, stability and cooperation - but it is necessary for all countries of the region to make their contribution."

According to the statement, Scott assessed that the new EU enlargement strategy was an important signal for the European future of Serbia.

The two interlocutors "emphasized the importance of continuing the dialogue between Belgrade and Pristina with the mediation of the European Union, as well as the implementation of the Brussels agreement."

The ambassador welcomed Vucic's initiative to hold internal dialogue on Kosovo and Metohija, and said the United States encouraged all parties to think substantively and work on a comprehensive solution for relations between Belgrade and Pristina.

Vucic and Scott also spoke about US support to Serbia's reform efforts, "and further strengthening of economic and military cooperation between the two countries."