"Serbia is allowed to choose" VIDEO

Serbia's President Aleksandar Vucic said that Serbia, as the country which has come a long way within the EU accession negotiation process, can choose its path 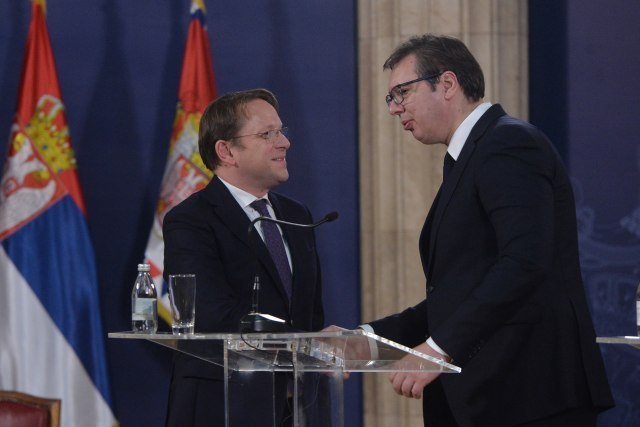 “It is going to be their choice, and I already see arguments in favour”, Várhelyi said.

"My personal sympathy, as president, is to take on new methodologies, and I am grateful to the EU Member States who have wished this," said Vucic, after meeting with Commissioner for Neighborhood Policy and Enlargement Olivér Várhelyi.

"When you have a good pass time, the right pass time that means a lot to the people involved in the reforms, I am sure that we will do our best to do our job as quickly as possible. I want to reaffirm our commitment to Serbia's European path, our determination to be part of the EU, but also part of the debate on how to best show people the EU benefits, so that they could be able to touch what the EU is, and not just have a vague idea about it", he pointed out.

In support of the new methodology, Vucic stated that, although he went to Brussels almost every time to open the chapter, he would not be able to list the ones we had opened and closed, and that this was now more transparent within the new methodology, which envisages six clusters.

He said that when the clusters are closed, which is not an easy work, because the new methodology is tight and restrictive, it gains access to EU funds.

"If you take competition and growth as a cluster, we have opened the largest number of chapters. Only three still pending, with six already open. We stand here perfectly. This is a great motivation for all of us to do this", Vucic explained.

He pointed out that there was a transition period for the free movement of the workforce, which is very important for us, since full freedom to obtain work permits would be dangerous for us at the moment.

He reiterated that once certain things are completed, under the new methodology, you can commit to the next cluster, and people would already feel the benefits.

He said that we cannot have all the parameters now, and that we will continue to study the new methodology and make the final decisions in the coming period.

He told reporters that Várhelyi presented him with the first part of a new methodology, which has been discussed lately in Serbia and also in Brussels.

"I would like to express my satisfaction with the hard work of the European Commission, and with Commissioner's personal engagement, as well as with what we can now see within the new methodology", Vucic said.

He pointed out that Serbia was keen to work on fundamental chapters, including chapters 23 and 24, pertaining to the rule of law.

He also said that he had discussed with the European Commissioner the "Mini Schengen" Balkan initiative concerning the free movement of goods, people, capital and services in the region.

"I came up with the idea that Serbia would like to become part of the Schengen Agreement with some EU member states, because we think it would be of great importance for our country to have open borders to Europe, and we think that Serbia can guarantee an important impact on maintaining security and safety", he stressed.

Vucic emphasized that these are ideas that need to be discussed in the EU, to see what they want and what we can offer.

He added his country was very grateful for the principles based on which the European Commission led its policy toward the Balkans.

"We believe that the Euro-integration process will continue, and that is of a strategic significance for us", he said.

Speaking about Várhelyi, Vucic pointed out that this is our "neighbor", who is closest to us because he is from Szeged, and that he is an exceptional person who fully understands the needs of the whole region, especially us from Serbia.

Vucic said that we can almost say that we have our own commissioner, which does not mean that anyone will turn a blind eye on us, because it is a process run by all member states.

He said he has learned a lot about the EU procedures from Várhelyi, whom he describes as an energetic, dynamic man, very diligent and dedicated.

"I want to express my personal satisfaction that Várhelyi was placed in charge of the neighborhood policy and enlargement within EU Commission", Vucic concluded.