The construction of "a new, more solid" concrete supporting structure instead of a supporting wall that was removed on Sunday will start on Tuesday. 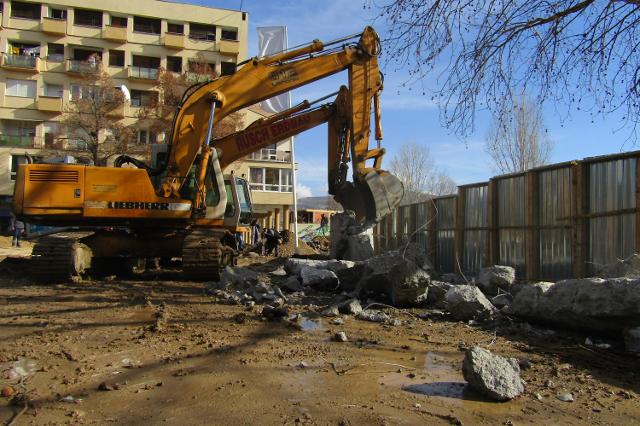 According to him, the new "construction" will be 70 centimeters tall and 120 centimeters wide, and will "fully guarantee the safety of citizens in the municipality of northern Mitrovica."

"It will fully fit in with the surroundings and a plan to build a pedestrian zone in the nearby Kralja Petra Prvog street," he said, as quoted by Beta.

The 80-centimeter supporting all was removed in the northern part of the divided town on Sunday, in line with an agreement reached on Saturday by Rakic and the Kosovo minister for spatial planning.

Announcing the deal on Saturday, Serbian Government's Office for Kosovo and Metohija head Marko Djuric said it was reached during the previous night, "thanks to the diplomatic activities of the government and PM Vucic."

The agreement was reached "with the backing of all of us included, while representatives of the EU and the US were also present," he told RTS.

EU foreign policy chief Federica Mogherini on Sunday issued a statement, saying that "the constructive commitment we have seen in the last two meetings of the dialogue in Brussels today brings results, to prove once again that only dialogue and political leadership can deliver and for the better."

"The most important issues related to the pedestrianisation of King Petar (Kralja Petra) Street and the reopening of Mitrovica Bridge have been successfully resolved in Pristina: the implementation of what was agreed began immediately and works have effectively started today. This will contribute to the freedom of movement, people to people contacts and ultimately reconciliation, and will benefit all citizens of North and South Mitrovica," said Mogherini, and added:

"Leaders in the region are demonstrating courage and vision by taking down walls and focusing on building bridges. This is very much the spirit of the EU-facilitated dialogue for normalization of relations between Belgrade and Pristina. The opening of the revitalized Mitrovica Bridge and the completion of the pedestrianised King Petar Street in the nearest future will be an important achievement in the implementation of the agreements reached in the dialogue."

"Progress on normalization of relations between Kosovo and Serbia is more than ever of utmost importance to preserve peace and stability between the two sides and in the region; it is also crucial for advancing of both sides towards European Union. The EU will continue its facilitation with strong engagement and I am looking forward to continuing the dialogue with the leaders of both sides," she said.